The marriage ceremony came at the Presidential Villa mosque on Friday and was attended by both families. 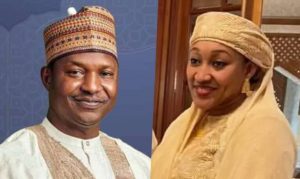 The marriage ceremony came at the Presidential Villa mosque on Friday and was attended by both families. Nana Hadiza, 41, married the attorney-general as his third wife.

The wedding was first disclosed on Thursday night by journalist Jackson Ude, and several bloggers have shared pictures from the event throughout Friday.

Nana Hadiza attended First Essence International School, then Cobham Hall, Kent, United Kingdom. She also attended the University of Buckingham. She had previously obtained education at the National Teachers Institute, Kaduna; as well as a master’s degree in international affairs and strategic studies, at the Kaduna Polytechnic.

Mr Buhari has conducted three previous weddings for his children since he assumed office in 2015, including Zahra Ahmed Indimi, Yusuf Buhari and Aisha Mohammed Sha’aban