ABSU WILL RECEIVE THE BEST OF MY ATTENTION AS GOVERNOR,- Professor Uche Ikonne

The Governorship candidate of the People’s Democratic Party in Abia State, Professor Uche Ikonne has said that Abia State University, will receive the best attention of his administration if elected as governor come 2023. 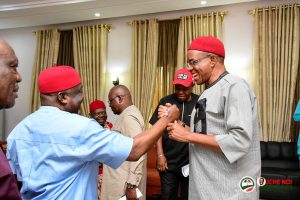 The Guber candidate who is also the immediate past Vice-Chancellor of Abia State University, stated this when he played host to the Governing authorities of the University, at his Umuahia residence.

According to Professor Ikonne ” As Vice-Chancellor, we worked so hard to achieve our mission of putting ABSU on the global lane, that, as at the time we left, the story of the University changed for good. As Governor & Vistor, I will prioritise my services to that Institution” 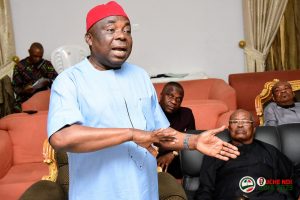 Professor Uche Ikonne used the opportunity to advise the leadership of the institution to consider going back to classroom in their best interest, this is because of the little or no impact of the sympathy strike to state universities. He analysed the relationship of State Universities to Federal  Universities, in respect to the Federal Government impact, with a conclusion that while the federal universities enjoy all the benefits of the strike, the State Universities will go back to struggle locally to source their funding, thereby losing on both sides.

He also added that continuity of academic calendar attracts candidates to schools, with reference to University of Ilorin as the most preferred Nigerian University because of it’s disposition towards strikes.

Professor Uche Ikonne thanked them for the visit, with a promise that Abians will surely smile under his watch. 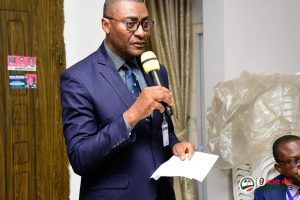 Speaking earlier, the leader of the delegation who is also The Pro-Chancellor and  Chairman of Abia State University Governing Council, Chief Mba Okoronkwo Ukariwo, told Professor Ikonne that they came to pledge their solidarity, support as well as prayers to the actualization of this Divine Mandate.
According to Chief Mba “Your achievements as the 7th Substative Vice-Chancellor of ABSU (2015-2020) are unprecedented, to mention, some of them are improved ranking of the University in the comity of universities in the country and beyond, Infrastructural development,not forgetting the Osisioma Campus of the University, introduction of new faculties, departments, as well as accreditation of academic Programs, Regular payment of staff salaries, and Promotion of Staff, etc.
We thank you for this uncommon accomplishments, great sacrifice, and pray that our good Lord will continue to guide and protect you on this journey to Abia State Government House, as reward for hard work is more work.”

Also Speaking, the Vice Chancellor, Professor Onyemachi Maxwell Ogbulu, while thanking God for Professor Ikonne, encouraged him not to lose focus in his vision.

In their separate contributions, Chief Ndukwe Ndukwe and Barr. Chibuike Nwokoukwu, SAN, who believe in the potentials of the former Vice chancellor to change the narative for good, described Professor Ikonne as an agent of positive change, and expressed confidence that he would replicate his good performances in ABSU, in the entire State.

They further charged him to be courageous and prayed God to strengthen him with wisdom to accomplish the task before him.

The Visit featured a special prayer for Prof. Ikonne, his family, as well as his gubernatorial candidacy.