In its typical manner, the All Progressives Grand Alliance, APGA has once again decided to ridicule itself by displaying its full blown ignorance to the public by raising the issue of a non-existent salary arrears, especially at this very joyous moment when Abia State is celebrating its glorious 31st anniversary. 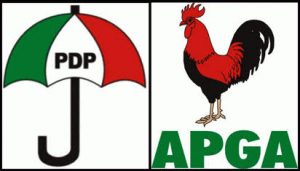 Rather than take advantage of the mood of the moment to rejoice and congratulate Abians and the PDP-led government in attaining three glorious decades and one year, it decided to massage its dying ego by choosing to pour invectives on the government of the people. What can be more insensitive and inconsiderate than this journey of the absurd?

Abia PDP will in line with its policy of not joining issues with opposition Parties, state the facts of the matter and allow APGA and others in cahoots with it to either learn lessons in governance or continue to revel in its deep-seated animus against the PDP government of Abia State.

For the records, the population of Abia workforce is currently higher than the workforce of three other States of the South East, namely; Ebonyi, Enugu and Anambra, and it continues to grow to assimilate more people to reduce the rate of unemployment and put more hands in the service to maximise the full potential of resources and opportunities available in the State.

For instance, in 1999, the entire workforce of Aba South Local Government Area alone was less than 250 but it is more than 1000 today and the same is applicable to several local government areas in Abia State. Despite this growing workforce, salaries of all government ministries are up to date. One therefore wonders where the APGA and other opposition Parties constantly manufacture these arrears of salaries owed Abia workers. Point blank: there are no salary arrears to Abia government Ministries workers.

It has also become imperative to remind Ndi Abia that one of the governorship candidates of these mushroom political Parties that keeps sermonising and pontificating on a non-existent salary arrears was formerly in the PDP and had chaired a sensitive Committee that strongly recommended the sacking of 70 percent of the the Abia workforce. What manner of leadership would this fellow provide if he mistakenly assumes office as governor of a State, certainly not Abia? Governance by shock, I guess.

In the process of reviewing the report of the Committee, the government met with leaders and representatives of the organised labour and in its wisdom and considerations of overriding public interest jettisoned the idea because of its negative implications in the overall development of the State, including the social and security burden such a measure would have inflicted on the State.

For those who do not know, the strategy of this government is to grow the economy of this State and by so doing increase the State’s income through the window of a buoyant Internally Generated Revenue, IGR, that will easily offset the huge wage bill the State is currently bearing stoically.

As a government that has good intentions, the main policy thrust of this administration at inception was to address the deplorable state of infrastructure in the entire Aba industrial zone and align it strategically to its capacity to grow the income of the State. Thankfully, this policy has yielded positive results and that is why Abia as at today does not owe any government Ministry worker any salary arrears.

It is quite unfortunate that APGA and other opposition Parties are blind to the series of achievements this administration has recorded which include but not limited to Abia being rated as the most peaceful State in the South East and amongst the five most peaceful states in Nigeria.

It is worthy to tell APGA and others like it that the Okezie Ikpeazu-led PDP administration successfully brokered a deal valued at USD50m with a private firm, Prof. Bath Nnaji’s Geometric Power Limited, to enable it to provide uninterrupted power supply to the Aba Industrial cluster and its environs to increase the production capacities of companies which will in turn increase the GDP and IGR of Abia State. Talk of encouraging local content and indigenous participation in the Nigerian economy.

APGA also conveniently ignores the fact that Abia State is far ahead of other States in its performance rating in the West African School Certificate, WASC, and Joint Admissions and Matriculations Board, JAMB, results. Bequeathing a legacy of good education is the best a government can give to its people. What more can parents ask for?

Sadly, APGA will brush aside the fact that Abia is the second State after Lagos to have attracted the highest number of Foreign Direct Investments, FDI, into Nigeria, but conveniently play to the gallery in an attempt to embarrass the government with a blanket description of the government as a failure.

It is a high mark of irresponsibility and quite unbecoming that APGA will not inform Nigerians that there has not been a single case of a politically-motivated assassination or even harrassment of political opponents in the whole of Abia State for the past seven years Dr. Okezie Victor Ikpeazu has governed Abia State; a testament to his large heart and accommodating disposition towards all Abians irrespective of political affiliations.

It is most unfortunate that APGA as a political Party has not gone beyond its primary election to nominate a flag bearer for the Abia 2023 governorship primaries and is up till this moment embroiled in litigations but has the effrontery to take on a Party like PDP that has not only concluded its primary elections but stands as the only Party in Nigeria that fielded candidates to all the available elective positions in all the constituencies nationwide.

For those who are bent on riding to popularity through unfounded and unnecessary attacks on the PDP government of Abia State, let it be known that the Abia government is very focused and will not be distracted in its solemn responsibility to provide good governance to the good people of Abia State, now and in the future.

As we make our final descent to the end of the Okezie Ikpeazu administration, we call on all well-meaning Abians to disregard the follies of APGA and others like it and join hands with the government to build the Abia of our dream even as we advise the wailers to desist from uninformed criticism and rather make useful suggestions that would make Abia State better for all of us.

PDP – Power to the People