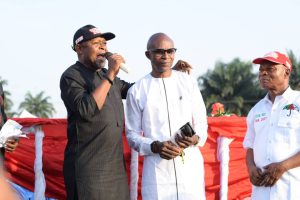 As a great mobiliser at the grassroots, any political office seeker who decides to ignore him, does so at his/her peril.

A common feature of Chief Ozems is that, he is so much in love with opposition politics. It runs in his body like blood. 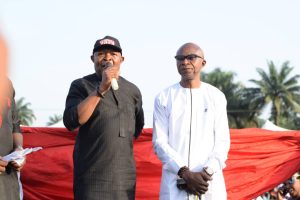 He likes swimming against the tide. It wasn’t a surprise that he was working for one of the opposing political parties in the state; the Labour Party.

As other Nigerians who are desirous of genuine change especially at the federal level because of the litany of self-inflicted challenges confronting Nigeria, I’m sure that what attracted him (Chief Ozems) to Labour Party then was because of the presence of former Anambra state governor and Presidential candidate of Labour Party, Peter Obi. 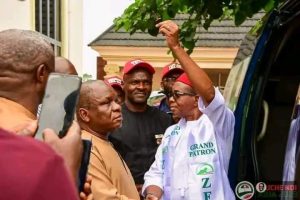 During a conversation, Chief Ozems was reminded of the role played by former Rivers state Governor and current Minister of Transport, Rotimi Chibuike Amaechi in 2015. Amaechi threw away the presidency that should have remained in the South-south region because of a Vice Presidential slot or ministerial appointment.

During the rally, Chief Ozems officially and openly publicly dumped Labour Party and declared his intention to work for the emergence of Prof. Ikonne as the next governor of Abia state.

“I dumped Labour Party because Prof. Uche Ikonne is the most qualified for the governorship seat. He is the only one amongst the rest that has the capacity to develop Abia”.

“He demonstrated this capacity in the previous positions he held in the academia. The demand for equity and justice for the Ngwa extraction in Abia Central senatorial zone is more important than any individual interest.

“I discovered in Labour Party that most of the contestants are hiding under Peter Obi to deceive our people. They don’t have what it takes to change the narrative, therefore I regard them as noise makers.

It would be recalled that an APC Chieftain, former federal lawmaker representing Aba North/South federal constituency and former Deputy Speaker, Abia State House of Assembly, Rt. Hon. Uzor Azubuike had decamped from APC to PDP with over 3000 loyal supporters across Abia State and has since thrown his weight behind the PDP gubernatorial candidate, Prof. Uche Ikonne.

Rt. Hon. Azubuike who holds the traditional title of “Ijiriji” donated a vehicle to the campaign organisation of Prof. Ikonne.

Also, a former Chieftain of All Progressives Congress (APC), the APC Leader in Isiala Ngwa North and two time Federal Lawmaker, Sir Chinenye Ike has since joined the list of people from the opposition who are supporting Prof. Ikonne with about 500 of his supporters.

Prof. Ikonne is sure crusing to victory .