Abia 2023: Distorting of facts and history by desperate politicians

A gang up of what many Abians have described as undemocratic forces under the guise of Abia North Consensus Candidate Screening Committee has been visiting candidates of Abia North extraction who are vying for the Abia State governorship seat on the platform of various political parties. 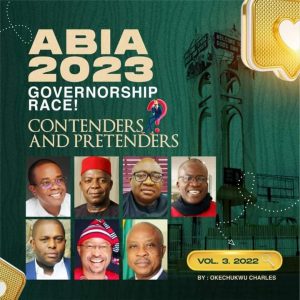 According to reports, members of the team led by one Dr. Uduma Nnate, who recently acquired and honorary Doctorate Degree from a mushroom institution in Aba, Abia state just last year, recently visited the Prof. Gregory Ibe, founder and Chancellor of Gregory University, Uturu, who is contesting for the highest political office in the state on the platform of All Progressives Grand Alliance (APGA).

It’s well known that the purpose or essence of the visit was to choose a consensus candidate that would represent the Abia North zone in the 2023 general election.

Unknown to the group, they have succeeded in passing a message that Abia North is a graveyard of weak gubernatorial candidates who are seeking assistance through consensus.

One of the beauties of constitutional democracy is that people have the right to choose who will represent them at every level.

Based on this, the group has the right to visit all the gubernatorial candidates but they should realize that they are embarking on a mission impossible.

It’s impossible because, at this stage, It will be possible for a camel to pass through the eye of a needle than for any of the candidates to step down for each other under the guise of consensus candidate.

Members of the so called Abia North Consensus Screening Committee are fully aware of this. One may conclude that the members of the Committee want a piece of the action because they will have to wait for another four years if they fail to take advantage of the current situation.

It’s sad and unfortunate that the Committee members are deliberately distorting an account of the Abia Chapter of Equity for selfish reasons or they do not know what the document is all about.

There is irrefutable evidence that shows that the document which was signed on August 2, 1981; ten years before the creation of Abia State wasn’t based on the three senatorial zones.

The Charter of Equity was between the two main political blocs; the old Aba division and Umuahia division. The three senatorial zones were created in 1999 following the restoration of constitutional democracy.

The Umuahia division has ruled the state for 18 years through Dr. Ogbonnaya Onu, Orji Uzor Kalu and T.A. Orji while the Aba division is yet to complete 8 years through Governor Okezie Ikpeazu.

For the sake of equity, the Aba division should be allowed to complete another two terms of eight years. Anything less than that is an abuse and insult to the wisdom of the founding fathers of the state.

Based on this, the conspiracy going on in Abia North will not see the light of the day. Uchenna Eleazar Ikonne, a professor of Optometry and the gubernatorial candidate of the Abia PDP who is the target of the conspiracy, is a product of equity.

Prof. Ikonne is a better candidate when compared to his opponents from candidates across party lines.

With a rich academic background, Prof. Ikonne who hasn’t benefitted from any government patronage unlike his opponents has what it takes to take Abia State to a higher level.

As we approach another election year, Abians will resist any gang up. No amount of gang up will stop Abians from voting for a competent, tested and God fearing candidate.