HOW ABIA STATE POLYTHENIC WAS LOOTED (Part one) *How Governing Council, Rector fought over contract awards By Prince Clinton Uba

Abia State Polytechnic, Aba, was set up in 1992, and it formally took off in 1993 at the premises of the Girls Technical College, Aba. 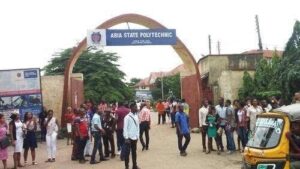 The institution was legally established by the Abia State Edict number 8 of 1994 which had a retrospective effect from 1992 by the then Military Administrator, Col. Ike Nwosu, on 17th September, 1994.

But, since 2012, the Polytechnic has been bedeviled with crisis as staff unions in the institution has been protesting the nonpayment of accumulated salaries and non-remittance of check off dues and even funds meant for the staff Cooperative society by the various management of the Institution.

Since the Gov. Okezie Ikpeazu administration assumed office, there have three reports detailing the rot in the Polytechnic. These are Report of the Ad-hoc Committee on Administration, Report on the 2015 Visitation Panel to the Polytechnic, the Approval for the Implementation of the CF Panel Report and the recent 2020 summit on Abia state polytechnic, Aba few weeks back with a lengthy but flat communiqué.

Both the organizers and the participants during the last summit knew they were never telling Abians the truth; you may as well call it a mere jamboree.

Our platform, newsmirrorng.com investigations revealed that some present and past principal officers of the institution were recommended for discipline and refund of huge sums of money arising from embezzlement, bloated wage bill and double dealings and inflation of contract awards.

Even the N17 million meant for the payment of the land acquired from the Umuarakpa and Umuogbaraegbe villages for the permanent site of the Polytechnic could not be paid despite huge sum of money available to the then Governing Council and Rector.

The institution had gone from one form of crisis to another. On December 19, 2016, like many other times in the recent past, workers shut out the management team of the Polytechnic over nonpayment of 7 months arrears of salaries owed them. Now, the salary problem, according to the report available to us is about 21 months.

Apart from the salary problem, so many of the courses offered by the school are not approved which has made the school to shy away from convocation for the past 10 years.

The protests always held in front of the school’s gate causes gridlock on the busy Aba-Owerri road as the workers bore placards which read; “we are not slaves, we deserved to live, You must pay us our salaries, This is sheer wickedness and injustice, Pay us our salaries, No more Council, change management in Abia Poly, Living is better than caskets.”

Before then, the workers had been on several warning strikes to press home the demand for the payment of their arrears of salaries.

There have been lots of questions raised by concerned stakeholders including the state government on how an institution with over 20,000 student capacity then and other avenues for internally generated revenue could not pay salaries for months. The state government also adds a subvention to the Polytechnic with N90 million, though this had not been regular.

A whopping N2 billion loan obtained by the Polytechnic was mismanaged by some principal officers and till moment, despite the various reports indicting them, they have been left to be walking freely, raising unanswered questions, why the Ikpeazu administration repaid an inherited loan of N2 billion without raising eyebrow on how it was embezzled and bring the culprits to book before or after the payment

Investigations by newsmirrorng.com revealed that from 2007 to 2014, resources belonging to the Polytechnic were mismanaged by the Rector and Governing Council. There was massive employment of workers without considering the needs of the Polytechnic. Some of the workers were placed on outrageous salary scales, far above what they should earn.

Again, non execution and inflation of awarded contracts were the order of the day while TETFUND releases which were meant for the infrastructural development of the Polytechnic were allegedly diverted to private pockets.

A report of the 2015 Visitation panel to the Abia State Polytechnic, Aba, volume 2, Executive summary sighted by newsmirrorng.com signed by Prof. Joshua Ogbonnaya, among other members of the panel, indicated that during the tenure of Sir Allwell Onukaogu as Rector and Hon. Christopher Enweremadu as Chairman, Governing Council, the latter’s interest severally clashed with that of the Rector and his principal officers working together as management team.

In the report, Enweremadu stated that the Rector disobeyed most lawful orders of the Council despite taking part in the decision.

“Sir Onukaogu said before the panel on 23rd September, 2015, that Hon. Christopher Enweremadu unilaterally awarded to himself six contracts at the Osisioma campus which was not tendered for and without due process.

Hon. Christopher Enweremadu on 28th October, 2015, alleged financial recklessness and abuse of office by Sir Onukaogu and Mr. Onuma who were the two signatories of the Polytechnic’s bank accounts against the financial regulations of the institution and without the consent of the Council.”

Sir Onukaogu whose tenure ran from 2007 to 2014, was also accused of paying one contractor, Ugolanson Nig. Ltd a total of N 120 million purportedly to gratify him for his supply of TETFUND science equipment proforma invoice which had already been used by NBTE accreditation. The payment was later found to be double payment to Ugolanson.

The Prof. Ogbonnaya panel recommended that Enweremadu, Onukaogu, Onuma and the company, Ugolanson, refund sum large sums of money to the Polytechnic, which has not be done as at the time of filing this report.

In the last jambore called summit that lasted three days, Abians had expected a pragmatic approach in resolving the problems of the ailing institution but the summit failed to address it, making the call for resumption after the Covid – 19 induced holidays a return to the old order of strike if proactive measures are not adopted to clear the mess bedevelling the school.

The communique for instance, should have addressed what is the right wage structure for the institution since it has been confirmed that a Phd lecturer earns high than a Professor of high standing in the sister, Abia state University, Ututu.

Abians had expected that they look at the viability of some departments as it was discovered that they have for instance 15 lecturers in just a department that has only few students.

The Communique should have addressed how to grow the student population since it has gone done from over 20000 in 2014 to about 9000 due to multiply strikes in the school occassioning the disruption of academic activities, resulting to low admission in take.

Again, have those that embezzled money been called to refund the money since that time till moment?

We shall keep you posted.
( Wait for part two)