The Chief Whip of the Senate, Orji Uzor Kalu, says it will be difficult for any Igbo to win presidency without zoning the seat to the South East. 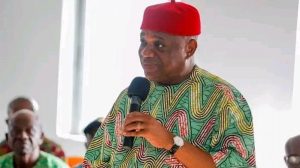 Kalu, while briefing reporters at the National Assembly Complex in Abuja on Tuesday, said presidency is not a regional issue and could only be won with the support of other geo-political zones.

He, therefore, urged his fellow politicians from the South East eyeing the highest office to wait for another time when major political parties would agree to zone the ticket to the region.

He also enjoined the Southeast to vote the All Progressives Congress (APC) in the coming elections, adding that the region would be the biggest beneficiaries of Asiwaju Bola Tinubu’s presidency.

“So, it is not personal. It is political and party. This thing is about party winning elections. I have chosen to be in APC. Why will I vote against Tinubu? It’s madness, and I’m not going to do it. Elections go along party line, not along tribal line.

“For me, we will wait for another time and see how all Nigerians will agree to zone the presidency to the Igboland. But for now, our presidential candidate is Bola Ahmed Tinubu. Tinubu is a strategic leader, he will make his presidency beneficial to the Igbo. The Igbo will be the biggest beneficiaries of Tinubu’s presidency.”