Democracy is a system of government whose outcomes in elections are determined by the people. For an election to be adjudged successful, it must be free, fair and credible, and these are factors driven by the system’s ability to allow the people to so freely express their choices without let, hindrance or coercion. 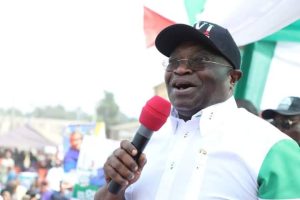 Such free choices are expressed in several ways in the run up to the election and give an insight into what the final outcome would be.

It is therefore safe to say that following on the above, the Governor of Abia State and the PDP candidate for Abia South Senatorial District, Dr Okezie Ikpeazu is in the clear lead to win his election. His general and wide acceptance by the people was epitomised by the spontaneous outpouring of love to him by the people on the streets of Aba as he walked the road to the scene of a fire incident recently.

The unfortunate incident had happened at a petrol station on Aba-Owerri Road, Osisioma Ngwa LGA, Aba, and the Governor, who was on his way to another occasion had his attention drawn to the incident. Rather than drive past to his original destination, he chose to stop to ascertain first hand the cause of the fire incident, evaluate the extent of damage and motivate the fire fighters on ground. And as soon as the mammoth crowd that had besieged the area sighted him, every other thing became secondary to them as they broke into spontaneous jubilation and mobbed the Governor while singing his praise. Although it was a convergence of Aba residents of different political intersts, the presence of Ikpeazu unified all of them as they see him as the man who can continue his legacies of recovering Aba through legislative instruments at the Federal level as their Senator.

In the midst of the ecstasy, the Governor alighted from his car, walked on with the swag of a man assured of the people’s love and waved majestically at them with a smile that reeks of confidence.

It was indeed a herculean task for security details to stop the mob from advancing further. But Ikpeazu is their man, their idol so to speak, so the people did advance even further.

The reason for this effusive show of love to a man who has suffered the most acerbic propaganda, acidic narratives, and malicious falsehood weaved against him by opposition elements he has roundly and severally defeated both at the polls and the courts, yet is finishing so strong his traducers marvel, is very easy to decipher. Truth has finally risen above the dark clouds of malicious falsehood and the people now know that Ikpeazu’s performance is one that has restored the lost glory of Aba.

Having suffered near-total absence of federal government presence due to weak representation and playing to the gallery by Senator Enyinnaya Abaribe the current Senator representing Abia South, residents of Aba know that the man to take the challenge up with the Federal government, not necessariy through unproductive strategy of belligerence and bellicosity as is the case now, but through adroit engagement of people and agencies that matter using his wide connection and first hand knowledge of the challenges confronting the people, is Governor Okezie Ikpeazu.

That unprompted, unplanned scenario at the scene of the fire incident in Aba is what has further got Ikpeazu’s opponents worried. His popularity keeps growing in leaps and bounds, from strength to strength. They know that given that scenario and similar ones to it everywhere the Governor goes, Governor Okezie Ikpeazu has already won the 2023 Abia South Senatorial election.