There is growing concern in the ruling All Progressives Congress (APC) that the party’s presidential candidate, Senator Bola Tinubu, and all its other candidates for the 2023 election may be disqualified. 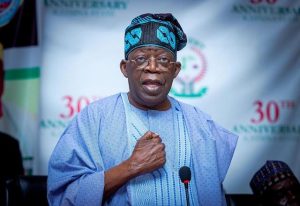 This is due to the judgement of a Federal High Court sitting in Abuja which nullified the nomination of Governor Isiaka Oyetola and his deputy governorship candidate, Benedict Alabi, for the 2022 Osun State governorship election.

Ruling on a suit filed by the Peoples Democratic Party challenging the nomination of Oyetola and Alabi, Justice Emeka Nwite agreed with the submission of PDP on the grounds that Governor Mai Mala Buni who submitted their names to the Independent National Electoral Commission (INEC) violated the provisions of Section 183 of the Constitution of the Federal Republic of Nigeria and Section 82(3) of the Electoral Act 2022.

The court declared that Governor Mai Mala Buni acted in contravention of the provision of Section 183 of the Constitution when he held dual executive positions as the Governor of Yobe State and the Chairman of the National Caretaker Committee of APC.

The provisions of Section 183 read in part: “The Governor, shall not, during the period he holds office, holds any other executive office or paid employment in any capacity whatsoever.”

While the legal representatives of Osun State governor had promised to appeal the ruling, its implication, it was learnt, is already causing panic in the ruling party.

According to legal opinions on the issue, the ruling in its current subsisting nature, means that all actions of Buni while in office as APC acting boss, stand invalidated.

These actions, include the signing of the nomination of Ekiti governor-elect Abiodun Oyebanji, as APC candidate for the June 18, 2022 poll in the state, the nominations of candidates for other outlier legislative polls, as well as the conduct of the party’s elective national convention which gave birth to the current NWC, among others.

The biggest threat posed by the ruling to APC, is the possible consequential disqualification of all its candidates for the 2023 poll, including the presidential ticket of Senator Bola Tinubu and Kashim Shettima, considering that Adamu’s NWC, conducted the primaries.

Once the NWC is invalidated by the reason of Buni’s involvement, all actions of the NWC, would be deemed null and void.

Reacting to the unfolding legal drama, constitutional lawyer, Dr Kayode Ajulo, said: “It is a plague that could have been avoided if only they took my position on Governor Buni’s chairmanship misadventures serious. But the judgement has vindicated me.”

In an earlier statement, dated July 31, 2021, he warned that the party could come to greater grief if Buni stayed, considering the subtle warning in the favourable majority decision.

On Saturday, Ajulo referenced the statement which read in part; “Without prejudice to the ratio decidendi of the majority decision of the Court, it is imperative to state pressistimo and very clearly too that with the unanimous position of the Apex Court that it appears the actions of the APC in permitting a sitting Governor as the Interim Chairman of the Party is in violation of the Constitution of the Federal Republic of Nigeria, it is my sincere view that the Interim Chairman of the APC should immediately step down. My humble but cosmic review of the judgment comes with an indication that the Governor of Yobe State, Mai Mala Buni has to vacate his seat, as the Chairman of APC with immediate effect.”

Breaking down the implication of the Friday ruling, he said if the apex court goes with the decision of the high court, the current National Executive of the party, will have to go.

“If the Supreme Court upheld the judgment, the party’s presidential candidate, Bola Tinubu, and other APC candidates for every elective position will have no business in participating in the 2023 General Election.

“Can one put something on nothing and expect it to stand? Unless some strategic steps are quickly taken, invalidation of the party’s executives and candidates across all levels will be a great disaster to the APC and could mark its total collapse. This development is a stern warning to politicians to henceforth have regards for law and reasoned thoughts,” he reasoned.

But the National Publicity Secretary of the APC, Mr Felix Morka, a lawyer, dismissed the fears being expressed as misplaced.

Speaking in an interview, Morka expressed confidence that the judgment of the High Court would be set aside by the Court of Appeal.

He maintained that Justice Nwite erred in his pronouncement.

He said: “The judgment of the Court is unsupportable. We are confident that the Court of Appeal will upturn the judgment.

“It isn’t supportable by fact of law. What the Governor Buni Caretaker did was ratified by Convention, which is the highest organ of the Party. The Court didn’t avert itself to the fact of the matter.

“So, there is nothing to worry about. That decision will be challenged and we are confident that the Court of Appeal will upturn it.”

In the Friday ruling, the court, headed by Justice Emeka Nwite, sided with the opposition PDP which initiated the suit, primarily to disqualify Governor Gboyega Oyetola of Osun State, as the candidate of the ruling party in the July 16, 2022 governorship election in the state, eventually won PDP’s candidate, Ademola Adeleke.

But the suit, commenced on April 7, 2022 may be doing a more significant damage to the fortunes of the ruling party, across board, with the trial judge upholding the argument that all Buni’s actions in office as the party’s acting chair, were null and void.

The party chair, alongside the national secretary, by the dictates of the election laws, signs the nomination of every candidate of the party, before such could be deemed valid, by INEC.

With Justice Nwite ruling that Buni, being governor, should not have held another executive position as the acting chair of the party for two years less 25 days.

It will be recalled that Buni, the sitting governor of Yobe State, was sworn in as the acting chairman of the party by the Minister of Justice, Abubakar Malami, SAN, following the controversial ouster of an elected National Working Committee, chaired by former Edo governor, Adams Oshiomhole, by President Muhammadu Buhari-inspired National Executive Council.

Justice Nwite’s ruling, however, appears in dissonance with the majority decision of the Supreme Court in the appeal arising from Ondo governorship election of October 9, 2020, won by the incumbent Rotimi Akeredolu of APC.

In a razor-thin split decision which favoured him, the apex court held that the conduct of the primary election and nomination of candidates, is an internal affair of a political party, which the judiciary can’t scrutinise.

The majority decision went further in resolving the appeal brought by Eyitayo Jegede of the PDP that even when a political party is in error of its rules, its internal activities can’t still be challenged. The minority report however ruled that Buni’s acting headship of the ruling party, was an incurable constitutional error, which invalidated Akeredolu’s nomination as the party’s candidate, because it was signed and passed to INEC by Buni.

The minority decision of three justices, out of the seven that heard the appeal, had invalidated Akeredolu’s election victory, because of Buni. While the majority decision didn’t go fully into the con- stitutionality of Buni holding two executive positions at the same time, it ruled that not joining the governor as a necessary party, to argue his case directly, weighed in his favour and by extension, Akeredolu’s.

The judgement was given on July 28, 2021. Immediately the judgement was delivered, some top party leaders asked Buni to step down, including Minister of State, Labour and Productivity, Festus Keyamo. Buni, aided by his legal team, heavily backed by the deputy senate president, Ovie Omo-Agege, spurned the call.

Keyamo now speaks for Tinubu’s presidential campaign, while serving as minister. Possibly taking its cue from the stance of the majority ruling, PDP, this time, joined Buni as a necessary party in the suit, which was filed almost nine months after Akeredolu’s narrow judicial escape.

Buni, being joined as a necessary party, must have also emboldened Justice Nwite to go into the merit of the suit, despite the subsisting Supreme Court precedent.

With the appeal arising from the all-important suit expected to advance to the apex court, an opportunity would finally be presented to Buni, to defend himself, and the final court to decide whether he violated the provisions of Section 183 of the Constitution of the Federal Republic of Nigeria and Section 82(3) of the Electoral Act 2022, by accepting the acting appointment while serving as governor.