The battle for the soul of Katsina State has continued to gather momentum as 19,500 registered members of the ruling All Progressives Congress (APC) have defected to the Peoples Democratic Party (PDP) in President Muhammadu Buhari’s Daura senatorial district. 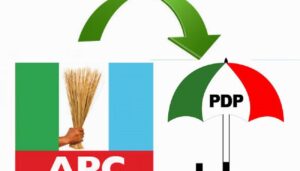 The defectors cited the lack of accomplished campaign promises by the APC-led administration, economic hardship as well as security challenges bedeviling the state as their reasons for leaving the ruling party for the opposition PDP in the state.

Receiving the defectors in Baure town yesterday, the state Chairman of PDP, Hon. Salisu Yusuf Majigiri said the 19,500 defectors were from Baure and Zango local government areas of the state.

Baure and Zango LGAs are among the 12 local government areas that made up the Daura senatorial zone of the state.

According to the PDP chairman, “Today (Saturday) we received 19,500 defectors from the APC into our great party, the PDP, and most of them are APC exco members from different political wards in Baure and Zango LGAs. We will work with them to rescue Katsina from APC in 2023”.

He enjoined them to go back to their respective wards and work for the success of PDP in 2023, adding that the party is set to reclaim power from the APC in order to tackle what he described as a myriad of challenges afflicting the state and the country at large.

Earlier, the state PDP governorship candidate, Senator Yakubu Lado Danmarke, called on the defectors to reject any form of inducements in readiness for the battle of winning the forthcoming general election.

He explained that the PDP has been receiving thousands of defectors from other political parties in the state into its fold, and predicted that the party would receive over 100,000 defectors before the commencement of 2023 campaigns.

Danmarke reiterated that if elected as the governor of the state he would eradicate poverty, economic hardship, and security challenges bedeviling residents of the state through meaningful policies and developmental programmes.

Senator Ahmed Babba Kaita who also addressed the defectors said the opposition PDP needs not to campaign before winning any election in the state because of what he termed massive failure and bad leadership of the APC-led administration.

He said: “The failure of the APC administration in Katsina State is a clear sign of victory for the PDP. The party and its leadership have nothing good to show after about eight years of its administration in the state. Their government is full of deceivers and liars”.

He also flayed the state government for its failure in project execution that would alleviate the plights of the masses, saying the decision of the defectors was to help end the era of the APC’s misrule and maladministration in the state come 2023.