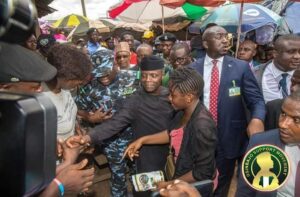 According to Tolani, Chinaza had breezed past the vice president’s personal security, grabbed his hand, and compelled him to visit her mum’s shop.

The incident happened at the popular Nyanya market in the Federal Capital Territory, Abuja when Osinbajo visited retail stores to promote the Trader Moni initiative of the Buhari administration. 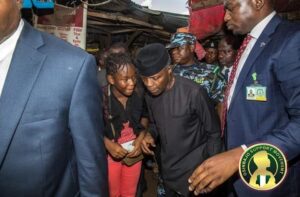 Osinbajo travelled to major markets in Nigeria when Trader Moni was launched to ensure that the funds reached traders.

TraderMoni is an empowerment scheme of the federal government created specifically for petty traders and artisans across Nigeria. 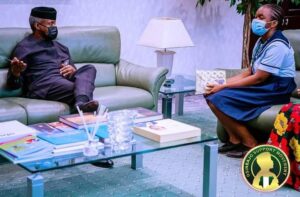 Tolani wrote on Twitter: “In 2018, Professor Osinbajo visited Nyanya market, Abuja to monitor the impact of the TraderMoni scheme, a mild shock greeted him. 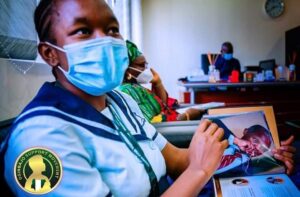 “Chinaza, whose mother owned a store at the market, and had promised herself to tell the VP what she thought of him from his appearances on her TV and other media, made her way through his security and grabbed his hand.

“Amidst the presence of a security detail, and an extremely large crowd, she tugged at the VP’s hand ceaselessly, insisting that he visited her mom’s store, and telling him about how much he inspired her to be courageous and reach for her dreams.

Fast forward to two years and some months later, Chinaza sits with her mum in the presidential villa, with a man who has now come to know her as a “daughter”.

“Almost three long years since their time of contact and a few correspondences later, Chinaza is on her way to The University with dreams of becoming a Medical Doctor, and the ideals that she has picked up from observing The Prof. up close and afar are unchanged.”