The development has all but guaranteed the Vice-President’s battle against Bola Tinubu, a towering political entity of the ruling All Progressives Congress. 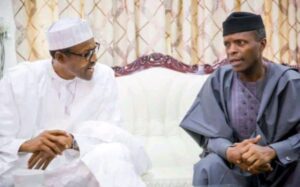 Vice President Oluyemi Osinbajo has informed President Muhammadu Buhari of his intention to run for president in 2023 and sought the blessing of his principal who did not make immediate commitments.

Osinbajo’s move came when he met with President Buhari on New Year’s Day with the mindset that his ambition will see a gradual but consistent upswing if moored to honesty and uprightness from the beginning, according to three administration officials familiar with the development.

“The Vice-President did not want to go into the election year by hiding a plan which the president had probably already known about,” a national security aide told The Gazette on Monday night under anonymity because the parley was not approved for public consumption. “He knew that an immediate endorsement of the president, on the other hand, may not be so easy to come by.”

VP Osinbajo said he was not looking to ambush and railroad the president into endorsing him and has long acknowledged that it might take uncommon fortitude to tilt the president’s support towards himself, according to the official who was present at the meeting.

“But he would continue to make efforts to see if he could get the president’s backing nonetheless,” our source added. “It is inherently crucial