Governor Hope Uzodinma on Tuesday described as unnecessary the apprehension trailing the conduct of the National Convention of the ruling All Progressives Congress (APC), noting that the proposed date for the exercise could be changed if the need arises. 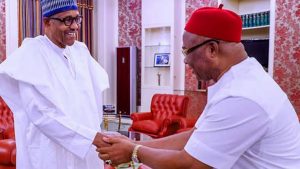 The governor, who spoke to State House Correspondents after a private meeting with President Muhammadu Buhari at the Presidential Villa, Abuja, however, explained that he had no information indicating that the date already set would be changed or had been changed.

According to Uzodinma, who said he was at the Villa to brief President Muhammadu Buhari over a couple of issues affecting his state, including security and governance, stated that the ruling party is not under any pressure because of what other parties might have done in preparation for the upcoming general elections.

The APC had proposed February 26 as the tentative date for the National Convention in its notice to the Independent National Electoral Commission (INEC).

But there are concerns that the February 26th date might not be feasible as the ruling party is yet to put in place main foundations and structures that should guide and facilitate the exercise.

Uzodinma, while fielding questions from State House Correspondents on the matter, said “of course, that is the decision of the party and there is nothing wrong even if it doesn’t hold, what is important is that we must have our convention. We have said it’s 26th, if anything, for any reason tomorrow, it’s not doable in the opinion of the party, we will move. But that does not mean that there is any intention to move.

100% Natural Herbs to Finally End Premature Ejaculation, Weak Erection and Small Manhood. Click Here Now .
“So, I’m confident that our party, contrary to the expectations in some quarters, will be stronger and stronger as we make progress and of course, in the nearest future, I’m very confident that APC will still be in power because the programmes are the party, the manifesto of the party, the individuals in the party, majority of the political class in Nigeria understands that APC is the party to beat and that is why they are joining day by day,” he said.

“Don’t forget that the APC is not a mushroom party, APC is a giant, it’s the largest party today in Africa and that is the party that other small parties should copy. Because small parties come to do zoning and all that does not mean their internal mechanism must not be the same with that of APC.

“APC is already the party on the ground that owns the federal government of Nigeria and up to 21 state governments. So, the discretion on how and when to do their convention should be an internal party affair and APC is the one wearing the shoe, with credible leadership, they know when to move and when not to move.

“So, I think we should just watch because, under the constitution of APC, buying form is one thing. We have three modes that we can adopt to elect our officers; either by direct primaries, by indirect primaries or by consensus. What if APC has adopted consensus and is not yet known to the public knowledge? We don’t need again to begin to sell forms and do that zoning or not zoning.

“We are democratic enough to know when to shoot and when not to shoot. I think you should just bring your people who have not joined APC to join the party,” he said.

On why he met with the president, the governor said he came to brief him on security, governance and made some requests, saying “in the same manner, I also used the opportunity to request Mr President to consider locating a power generating facility in Nworie River.

“Where we have been able to empty all the flood control systems by balloon technology and the tide has gone up, and because of the sufficient water in the river now, we can use that river to generate electricity to serve the entire Owerri Metropolis,” he added.