Governor Okezie Ikpeazu has assured the people of Aba that there is no going back on the total recovery of the Eziukwu Cemetery Road which has been abandoned for close to three decades. 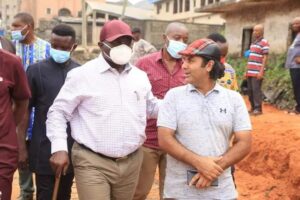 Speaking today when he paid a working visit to the project, particularly at the Eziukwu Road by Ehi Road end of the road, the Governor stated that his resolve to rewrite the history of infrastructure in Aba is fully on course. 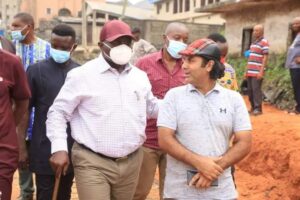 The Governor noted that the target is to push the project to terminate at the Cemetery Market Aba because of the critical role played by the market in the economy of Aba and Abia State.

He told the contractor to continue to ensure that all laid down specifications in the design of the project are adhered to strictly. He then asked the contractor to expand the scope of the project to include the fixing of all adjoining junctions which abutt at Eziukwu Road, including junctions like Market road, Cameroon road, Ehi Road, etc, assuring that government will be willing to accommodate variations in the contract for the purpose of these additions.