The five Governors (G5) of the Peoples Democratic Party (PDP), and their supporters may boycott the presidential campaign inauguration of the party’s candidate Atiku Abubakar, scheduled to hold in Uyo, Akwa Ibom State capital on Monday. 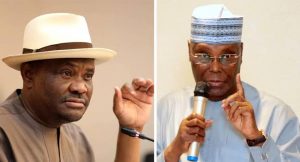 It was gathered that grievances of members of the group led by the Rivers Governor, Nyesom Wike, had deepened following the decision of Atiku to continue playing to the gallery instead of genuinely resolving the dispute.

Wike’s team was said to have remained resolute in its demands that the National Chairman of the party, Iyorchia Ayu, must vacate office to allow genuine reconciliation to take place.

On September 21, the team resolved to pull out of the campaign council of Atiku until Ayu vacates office.

Chief Bode George, who read the communiqué after the meeting said; “Senator Iyorchia Ayu must resign as the National Chairman of the party for an acting Chairman of the Southern Nigerian extraction to emerge and lead the party on the national campaign.

“Consequently, we resolve not to participate in the campaign council in whatever capacity until the resignation of Dr. Iyorchia Ayu,” he added.

It was learnt that the team had continued to reject other efforts excluding the resignation of Ayu made by some organs of the party to pacify them.

Members of the team, who were recently visited by the Adulphus Wabara-led Board of Trustees of the party, were said to have stuck to their Ayu-must-go demand as a precursor for peace.

When asked whether the Rivers Governor would attend Atiku’s campaign inauguration at Uyo on Monday, a source close to the team, said there was no need for such inquiry.

The source, who spoke in confidence, said: “Such question does not arise because the team had earlier pulled out of Atiku’s campaign and nothing has changed since then”.