An Imo-based journalist and publisher of Nigeria Watchdog Newspaper, Precious Nwadike has accused Uche Uzodinma, younger brother of Governor Hope Uzodinma, of mercilessly beating him up.

Nwadike landed in hospital after he allegedly fainted due to the beating given to him by the young Uzodinma and his boys on Tuesday.

Recounting what happened to him, Nwadike said, “I had visited National Identity management office, which is located along Port-Harcourt Road, by Eberelinks fuel station to enroll for National Identity Number. Upon arrival to the office, I was given a form and referred to OCDA office( still at Port-Harcourt Road) for data capturing. Knowing that it was already getting late, I pleaded with the lady to accompany me to OCDA so she could make case for me and she obliged me.

“The lady and one other woman who came for the enrollment got into the vehicle and we drove to OCDA.On getting to OCDA office, a man hit on our car bonnet and asked us to reverse. At first, I thought it was one of those thugs around OCDA office. It was when the other person who was flanked by two policemen instructed us to reverse the vehicle, introducing himself as the contractor of the Port-Harcourt Road project, that I realized that they were renovating the road and I obeyed even when I didn’t know their reason for ordering us back.It was later discovered that the said contractor is actually Senator Hope Uzodinma’s brother, Mr Uche Uzodinma. While I tried to park, the same man began to deride me, describing our vehicle as rickety, threatening to deal mercilessly with us if we wait any further.” 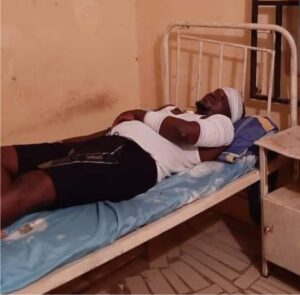 “We eventually parked across OCDA and attempted to cross over the other lane, when the same man who threatened to deal with us held me back and started beating me. Thereafter, he ordered some thugs who were with him to deal with me. He stood by to watch his thugs beat me to stupor. I lost consciousness when one of them hit me on the back of my neck.

“It took the intervention of two aides of Engr. Ikpamezie, the MD of OCDA, to prevent them from killing me. The OCDA boss upon sighting me shouted my name. Mr Uche Uzodinma entered his black Hilux Toyota Hilux and zoomed off with his convoy loaded with stern-looking men. I could not move any further. I fell down.”

Although the incident seems to be unrelated with his job as a journalist, many believe that Uche Uzodinma used the opportunity to descend on Nwadike because the Watchdog Newspaper has been very critical in its reports about the Uzodinma administration.