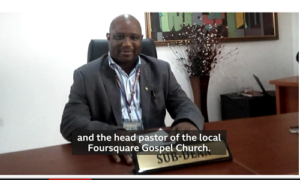 BBC Africa Eye’s on Monday released a documentary targeted at lecturers in some West African universities harassing their students for sex in exchange for grades/marks.

It was disclosed that female reporters were sexually harassed, propositioned and put under pressure by senior lecturers at the institutions – all the while wearing secret cameras in a 13-minutes video documentary released.

A UNILAG senior lecturer, Faculty of Arts, who doubles as the head pastor of a Foursquare Gospel Church in Lagos, Dr. Boniface Igbeneghu, was exposed as one of the culprits.

The undercover journalist posed as a 17-year-old student who wanted an admission at the University of Lagos.

The “student” endured a couple of sexual harassment from the Dr. Igbeneghu.

Igbeneghu, who invited the teenager to his office for a number of tutorials, subsequently began to have inappropriate conversations with her.

On their first meeting, he commented on her appearance.

In the 13-minutes secret filming, the lecturer revealed how his colleagues tossed and passed around UNILAG female students for sex.

He disclosed further how his colleagues patronised UNILAG Staff club ‘Cold room’ to commit series of atrocities on female students.

“Do you know that you are a very beautiful girl,” he asked her.

“Do you know that I am a pastor and I’m in my fifties. What will shock you is that even at my age now, if I want a girl of your age – a 17-year-old, all I need is to sweet tongue her and put some money in her hand and I’ll get her,” Igbeneghu said to her on camera.

Despite repeated requests, the lecturer failed to react to the BBC’s allegations.

Also, authorities of UNILAG dissociated itself from the lecturer’s actions.

It revealed to the BBC that the institution had a zero-tolerance policy on sexual harassment.

Furthermore, it refused to comment on the alleged ‘cold room.’

In a twitter post by its official handle, @BBCAfricaEye, it said; “for the past year, BBC Africa Eye has been secretly investigating sexual harassment by lecturers at West Africa’s most prestigious universities. 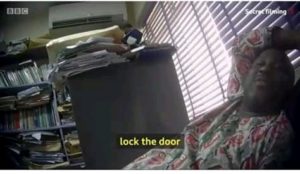 She said: “Hundreds of you asked us to do this investigation. We heard your call #SexForGrades”

Kiki Mordi, who was once a victim of sexual harassment, revealed what happens behind closed doors at some of the region’s most prestigious universities in the video documentary.

Over the years, there have been issues of female students being harassed for sex in return for marks in Nigerian Universities.

Sex-for-mark practice is a common problem in Nigerian institutions, which over the years may had been encouraged by Nigerian universities due to their failure to appropriately sanction erring lecturers. 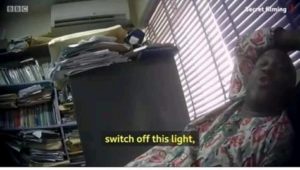 It should be recalled that last year, an embattled former lecturer of Obafemi Awolowo University (OAU) Prof. Richard Iyiola Akindele was reportedly sentenced to two years in prison for sexually molesting female students.