Details have emerged about Saturday afternoon’s jungle justice, in which a man was stoned and burnt alive in Nigeria’s capital city, Abuja, over alleged blasphemy. News Express, which witnessed the gory incident, earlier broke the story, also reporting on the ensuing stampede as the police arrived and fired shots. 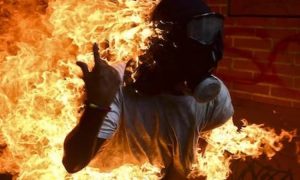 However, the intervention came late, as the middle aged victim had already burned to death s at the time the security agents arrived the scene. 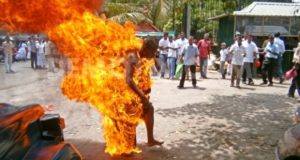 The man, said to be an artisan from one of the northern states, was accused of blaspheming Prophet Mohammed (SAW).

It was learnt that his accusers first gorged out the man’s eyes in one of the security posts in Timber Market where he was locked up, then stoned and immediately set him ablaze.

A stampede broke out as traders, artisans, motorists and passersby ran helter-skelter for their lives following the brutal killing of the man.

Policeman from Lugbe station arrived the scene and fired gunshots into the air for more than 40 minutes to disperse the hoodlums.

There is fear that a fight may break out in communities around the market, such as Sauka and Tudun Wada.

The police have yet to comment on the incident, which happened just as the dust is yet to settle on the lynching and burning, by schoolmates, of Miss Deborah Samuel, a 200-level Home Economics student of Shehu Shagari College of Education, Sokoto, over alleged blasphemy of Prophet Mohammed (SAW).

Deborah’s alleged killers have been charged for “criminal conspiracy and inciting violence”, rather than murder – a development which has been widely condemned as a mere slap on the wrist.