Professor Chukwuma C. Soludo was born on 28th July, 1960, and hails from Aguata Local Government Area of Anambra State. After his secondary school education, he proceeded to the University of Nigeria, Nsukka, where he graduated with a first class degree in Economics. He also undertook his post-graduate and doctorate degrees in Economics from the same University winning on both occasions, the prize for the best graduating student. 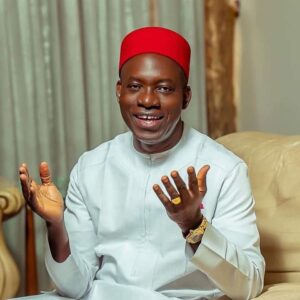 Professor Soludo had cumulative four years of post-doctoral training in some of the world’s most prestigious institutions, including: The Brookings Institution, Washington, DC; University of Cambridge, UK, as Smuts Research Fellow and Fellow of the Wolfson College; the UN Economic Commission for Africa as a Post-Doctoral Fellow; University of Warwick as a Visiting scholar and Visiting Research Scholar at Center for African Economies, University of Oxford (with funding by the Rhodes committee). He also attended over a dozen specialized courses and has had extensive research, teaching and consultancy works in different areas of economics.

He has worked at the World Bank both as a short and long-term consultant since 1993 and also at the United Nations Economic Commission for Africa, Addis Ababa. He was a consultant to UNCTAD; European Union (EU); Organisation for Economic Cooperation and Development (OECD); United Nations (UN) New York; United States Agency for International Development (USAID); African Development Bank (ADB); Common Market for Eastern and Southern Africa (COMESA); African Union (AU); International Development Research Council (IDRC) Canada; Council for the Development of Social Science Research in Africa (CODESRIA); Economic Community of West African States (ECOWAS); among others.

Professor Soludo has served as Senior Technical Advisor/Consultant as well as a Visiting Scholar at the IMF since 1994, and also taught IMF’s Financial Programming and Policy course to senior staff of Central Banks in West Africa and other developing regions. He has served as: Member, Technical Committees that drafted economic and trade policies for the Federal Government of Nigeria; and Executive Director of the African Institute for Applied Economics (AlAE).

Professor Soludo joined the Federal Government of Nigeria in July 2003 as the Economic Adviser to President Obasanjo and the Chief Executive of the National Planning Commission (NPC). Among other accomplishments during the 10 months in office, he was the Chairman/Coordinator of the team that drafted Nigeria’s economic and social reform program (2003-2007), the National Economic Empowerment and Development Strategy (NEEDS), and also pioneered the collaborative planning framework in the Nigerian federation by initiating and assisting state governments in designing their State Economic Empowerment and Development Strategy (SEEDS).
As Governor of the Central Bank of Nigeria since May, 2004, Prof. Soludo has refocused the Central Bank as an effective monetary authority and successfully implemented a fundamental restructuring which has led to unprecedented consolidation of the Nigerian banking system.

On account of this, the Nigerian banking system has been rated the fastest growing in Africa and one of the fastest growing in the world. He has also championed the establishment of the Africa Finance Corporation (AFC), a continental, private -sector driven, investment bank. He is promoting the Financial System Strategy 2020 (FSS 2020), the blue-print to grow Nigeria’s financial system to become Africa’s financial hub and to drive the Nigerian economy into the global league of top 20 economies by 2020. For his achievements, Professor Soludo is the recipient of scores of awards and recognitions from civil society organizations; NGOs; private sector organizations; religious groups; the Press; professional associations; student unions; universities; among others. The Financial Times of London has described him as Ita Great Reformer’. He is the winner of the ‘Global and African Central Bank Governor of the Year, in 2005, 2006 and 2007 by different international media institutions including The Banker Magazine published by the Financial Times of London.