*The Boy That Impregnated Me At 13 Came To Charge Phone, Watch Movies In Our Apartment* — Victim Says

The rising case of teenager pregnancy calls for urgent intervention between parents and relevant stakeholders in the country as 13-year-old junior secondary school girl was reportedly impregnated by 14-year-old boy. 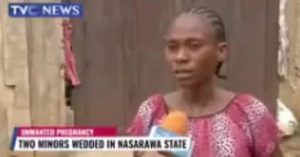 She shared her story with TVC News correspondent how the boy lured her into an uncompleted building and had canal knowledge of her.

The incident happened in Gwangwala community, Akpanga Local Government Area of Nasarawa State where under age children have formed the habit of copulating.

The pregnancy led to unprepared marriage and was consented by both parents.

The guardian of the underage mother, Hellen Philips while narrating the story said the incident happened when she traveled out of the Nasarawa State for social function.

The guardian of underage father, Christopher Madam said they have paid bride prize on the 13-year-old mother.
He mentioned N5,000, two crates of soft drinks among what they paid.

The Nasarawa State Government has dissolved the marriage for contravening the law of the state and federal government of Nigeria.

The civil society and government met the with parents of underage couple and demand that they return to school within the shortest possible time.