A police station in Aboh Mbaise local government area of Imo state has been attacked and set ablaze by suspected hoodlums. 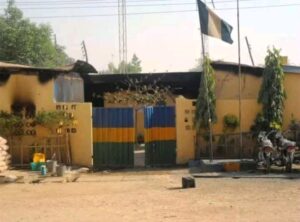 The incident which was confirmed in Owerri, by the Imo State Police Public Relations Officers, PPRO, Orlando Ikekwo, said there was no casualties.

He briefly said: “Aboh MBAISE police station has been attacked, and razed down, no casualties no loss of arm.”

However, sources from the area said “Policemen on duty fled and some of them injured as they were taking cover, when they saw some boys with inflammable substance pouring it around the station.

“These boys did not enter inside the police station, the only thing they did was to set ablaze the station and drove away. This has caused tension in the area as people started running for their live.”