The Minister of State for Education, Emeka Nwajiuba, has said the Academic Staff Union of Universities (ASUU) cannot dictate to the Federal Government what platform to be used in paying their salaries. 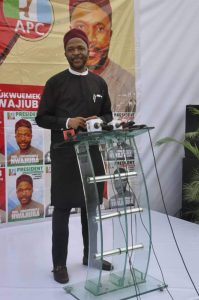 He stated this in Abuja while addressing journalists shortly after receiving his presidential Nomination Form of the All Progressives Congress (APC) purchased for him by the Project Nigeria Group.

“It is impractical and incongruous to continuously expect that somebody who is paid a salary continues to dictate to the someone who pays him: ‘This is how you must pay me’. This is where this anomaly is,” the minister said.

Mr Nwajiuba also appealed to the striking lecturers to return to the classroom as the Federal Government is working to address some of their concerns.

“We have pleaded with ASUU that ‘If there any areas where your salaries fall short, kindly address them within the ambit of IPPIS because that’s what the government has now,’” the presidential hopeful explained.

‘Go Back To Classes’
The Federal Government inaugurated a committee to renegotiate the 2009 ASUU agreement on March 7, 2022.

According to him, the strike embarked upon by ASUU was uncalled for, and expressed worry over the impact of the union’s action on the education of Nigerian students.

“Why they have chosen to go on strike over this (IPPIS) is what you and I can explain. There is nothing that ASUU wants that we have not agreed to. We would like them to go back to classes so that students can go back to class,” Nwajiuba added.

“As the nation earns, we pay them. As the nation makes money, they would get money. What we don’t want is for the children to miss the opportunity of their own time because there is a timeframe within which children must grow. The child cannot wait. It is important that ASUU returns to class.”

The minister’s comment adds to the continued debates over the payment systems for lecturers in public universities across the country. While the union says its University Transparency and Accountability Solution (UTAS) should be used for payment, the Federal Government maintains that the payment system has not met its technical requirements.

But ASUU, which down tools over two months ago, believes the government is paying lip service to the lecturers’ agitation.

According to the union’s president, Emmanuel Osodeke, the government’s budgeting of N4trn for subsidy payment is an indication that it is not ready to resolve the crisis.

“You can raise N4 trillion for fuel subsidy in a year, but you cannot raise N200 billion to fund your education because you don’t have money; it is a priority,” he told Channels Television when he featured on Sunrise Daily last week.

“You can spend N228 billion to feed children in primary and secondary schools, but you cannot raise N200 billion to fund your universities; it is an issue of priority, that is the problem.”

ASUU, among others, is fighting for increased funding for public schools as well as the usage of UTAS to pay the lecturers’ salaries.