The Rector Abia State Polytechnic, Aba, Professor. Okorie Kalu Osonwa has called on the public to desist from peddling rumours that tend to bring the institution’s name to disrepute. 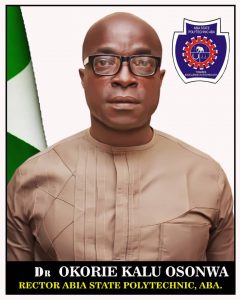 The Rector who stated this on Friday, at a press briefing held at the Institution’s Conference Hall, noted that the Institution has come to stay, stressing that after 17 years of existence, the citadel of learning is poised to continue to enhance knowledge as well as produce sound graduates and technologists that can meet the technological needs of the state and the nation at large. 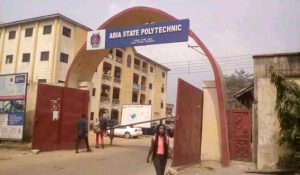 He stated that as an institution owned by the Abia State Government, the Governor Okezie Ikpeazu led administration has not failed in taking full responsibility of the institution. 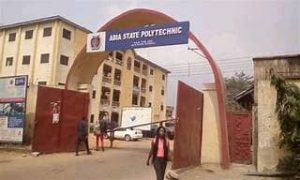 Prof.Osonwa revealed that the tuition of the students which is about N53,150 per section can only pay two months salary of staff, pointing out that in order to increase their revenue base and tackle the salary challenges of the school, it has come up with a template for establishing other sources of revenue generating windows like; Printing Press, Microfinance Bank and a Bread factory which will benefit the public as well as serve as an instrument of fund raising for the institution.

He said since he resumed office on September 2020, he has enjoyed massive support from Governor Okezie Ikpeazu, acknowledging also that members of management staff have assisted in tackling issues such as lateness of results, internet accessibility, handout and making textbook compulsory, stressing that these measures are geared towards making teaching and.learning easy for Lecturers and students.

Prof Osonwa said the Polytechnic achieved 99% of accreditation for all the programmes during the first exercise, emphasizing that during the second batch of accreditation which was done on the 22nd of march till the 26th of march 2022, the Institution recorded success, informing that the team expressed happiness with what they met on ground.

Prof. Osonwa, however informed the general public that the Institution’s admission form is out urging all to expect more goodies from Abia state Polytechnic for it has come to stay.

ASUU STRIKE: No going back on ‘ *No Work, No pay policy”* -Adamu Adamu, Education Minister