Interpol Systems Consultant in Nigeria, Sir Chikwe Udensi has felicitated with the Director ABN TV, a leading online medium in Nigeria, Mr. Ifeanyi Okali on his award as Distinguished Presbyterian, saying his service in God’s vineyard will not go unrewarded. 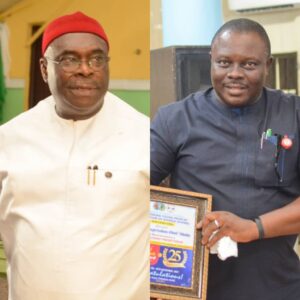 Recall that Mr. Okali was at the 2021 Shabach Da Lord and 25th anniversary of Presbyterian Young People’s Association of Nigeria, PYPAN South Central Synod which took place in Umuahia on Friday given a meritorious award of recognition for his contributions to the development of the youth ministry of the Presbyterian Church of Nigeria.

In a congratulatory message on Saturday, Sir Udensi who described Mr. Okali as ‘my brother’ applauded his selfless services in God’s kingdom.

The security expert prayed that Mr. Okali’s service in the vineyard of The Almighty will not go unrewarded, even as he prayed for more blessings upon the awardee.

A youth himself, he had continued to champion the cause of development of young people through empowerment, education and career counseling.

His platforms, ABN TV and Radio have been readily available for the promotion of issues that border on the development of young people across the Southeast region and the country at large.

In Presbyterian Church of Nigeria Nigeria generally, he had used his platforms to promote the church’s programmes and policies as a deliberate effort to expand the gospel of Christ.