SIR GABRIEL ONYENDILEFU DEEPENS HIS PHILANTROPIST GESTURES. *All the things he did recently stands him out from the crowd By Kennedy Onyenma

Sometimes last year,though coincidentally, Chief Gabriel Onyendilefu visited Ikem Nvosi Primary School. During the, unscheduled, visit he was confronted with the infrastructural dilapidation in the school. Right there he made a commitment to uplift the standard of the school as soon as possible. 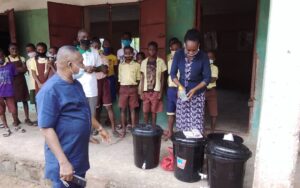 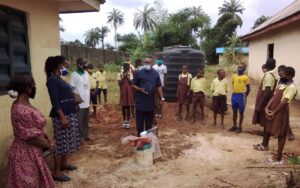 Few months down the line he has began what he terms “the process” of changing the face of Ikem Nvosi Primary school.

According to him, “by the time I finish what I have in mind for this school, people will no longer recognize it.”

In line with the recent directives of the Executive Governor of Abia State Dr Okezie Victor Ikpeazu that Government appointees should go to their Local Government areas to ensure that schools are de-contaminated for the exit students to return to school, Chief G. C. Onyendilefu immediately mobilised women and some able bodied youths to clear the school envioronment of the overgrown grasses that have taken over the school premises owing to the long closure of schools due to the Covid-19 pandemic. 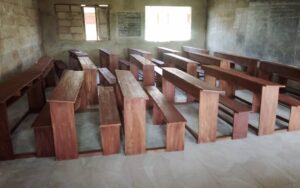 He did not just stop in Ikem, he also extended his financial support to all the communities in Isiala Ngwa South through their royal fathers who he met at the Local Government Council in Omoba.

So far, Chief Onyendilefu has indeed proven that he is a man of his words. About 5 classrooms have been tiled,including the corridors of the main school block.He has also sank a borehole with a 1,500 litre water tank to enable proper reticulation of water to the toilets, etc ,as soon as possible.

To crown it all, Chief Gabriel Onyendilefu has procured and delivered over 50, long, desks to ensure that the pupils will sit comfortably during their FSLC examination. In his words…”I will do more! 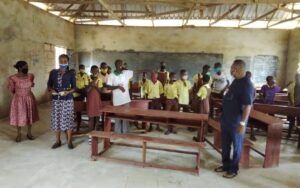 Since Ikem primary school was established in 2009, nothing much, in terms of infrastructural development, has taken place in the school. So, the intervention of Chief Onyendilefu is not just timely but historic,especially, if underscored by the reminiscence that he was also the person that single handedly funded the tiling of the office block some few years ago.

By his recent action,Chief G. C. Onyendilefu KSC, Miri Nezoro oha 1 of Abia State,has, once more, evinced his passion for the upliftment of the downtrodden,as well as his long standing conviction that an Investment in human capital development is germaine to the actualisation of the much talked about Sustainable Development Goal.

For the benefit of a hindsight it is on record,also, that Chief Onyendilefu’s philanthropy precedes his ascendancy to his current position of authority. Even as an ordinary civil servant, the burden of humanity has influenced his actions.

We can only but encourage him and his likes to continue their good works.
While taking receipt of the desks as well as over 50 Face shields,buckets and hand sanitizers,the headmistress, Mrs Emma Happiness Ihuoma, in the presence of her co staff,some students and few community folks, acknowledged that the gestures of Chief Onyendilefu is a prayer answered.

According to her,they have prayed and fasted ,even solicited for help from so many persons,before now,without any luck. She sang excitedly and prayed that God will bless Chief Onyendilefu and his family and all those who facilitated the visit.

Like the famous South African cleric, Desmond Tutu,once said, “do your little bit of good where you are ; it’s those little bits of good put together that overwhelm the world.”

Let’s assume that the Ikem Nvosi Primary School project is the metaphorical “Charity” that ‘begins at home…’ One thing, though, is sure… this “charity” will ‘not end there!”