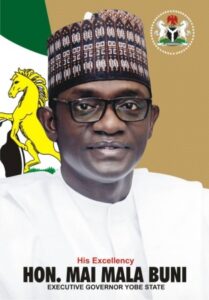 Youths of the ruling All Progressives Congress (APC) under the auspices of The Progressive Youth Movement, have risen from their North-West Town Hall Meeting in Kaduna on Saturday, with a call that they dissolved the Governor Mai Mala Buni-led Caretaker/Extraordinary Convention Planning Committee (CECPC).

The APC youths at the meeting with the theme; “Ready to Lead, Now or Never”, alleged that, the Buni led Committee has not only failed to organize convention for the party after almost two years of its appointment, it has given room for other elements to hijack of the Party.

One of the conveners and key note speaker at the Town Hall Meeting, former APC gubernatorial aspirant in Kogi State, Prince Mustapha Audu said, the youths have resolved to constitute a new Caretaker/Extraordinary Convention Planning Committee (CECPC) next week, which will hold a sound convention for the party by first week of February 2022.

He said: “We no longer recognize the CECPC that has been unable to organize a convention for the party. As far as we are concerned, the CECPC stands sacked and dissolved. They no longer represent any member of the APC.

“A new CECPC will be constituted next week with young and patriotic Nigerians and a date of February 2022 will be set for the APC National Convention.

“Whether they like it or not, we as young people will conduct the convention and show them that, what they have failed to do in two years, we can do it in two months. “Young people will force out the rot and decay in our party and begin to look for young, competent candidates that can represent us.

Audu listed the grievances of the movement against the Buni led CECPC to include cheating of party members, bringing in incompetent and criminal elements into the party, disorganizing the party among others.

On his part, Mr. Ayobami Oyalowo, a Co- Convener of the APC Stakeholder/Rebirth Group, asked Governor Buni to resign as the Caretaker Chairman of the party. He said: “We want him to resign even though we wish him happy birthday because he has overstayed his welcome.

He was supposed to spend six months but he has spent one year and another six months. “A party like APC should not be having the kind of problem we are having. Since they have come in as caretakers aside from the Ondo State election, we have lost every other election.”