Chief Whip of the Senate and former Governor of Abia State ,Senator Orji Uzor Kalu on Wednesday presented his first Bill since his assumption of office.

The bill was read by clerk of the Senate Mr. Nelson Ayewoh and was passed for second reading after a voice vote presided by over the President of the Senate , Ahmed Lawan.

Speaking in a telephone conversation on the motive of the bill S.A. to Senator Kalu, Barrister Emeka Nwala, said the bill is aimed at strengthening the Administration of Criminal Justice Act (ACJA). He explained further that that the bill seeks to amend the administration of criminal justice Act 2015 sections contradicting the principles of fair hearing and court jurisdiction as provided in the Constitution.

Recall that the Supreme Court, in an unanimous judgement on May 8th 2020, faulted a section of the Administration of Criminal Justice Act (ACJA) which sentenced the former Governor to 12 years imprisonment for fraud and money laundering on December 5 last year.

Senator Orji Kalu spent 6 months in incarceration at the Kuje Custodial Centre, Abuja after he was sentenced by Justice Mohammed Idris of the Federal High Court in Lagos.

However, the apex court, in a unanimous judgment by the Justice Amina Augie-led seven-man panel, held that the Federal High Court in Lagos acted without jurisdiction when it tried and convicted Kalu, his firm – Slok Nigeria Limited.

The Supreme court panel later quashed the judgment, the panel held that Justice Mohammed Idris, who conducted the trial and sentenced Kalu, was no longer a judge of the Federal High Court as at the time he delivered the judgment, adding that having been elevated to the Court of Appeal, Justice Idris, lacked the powers to return to sit as a High Court Judge. 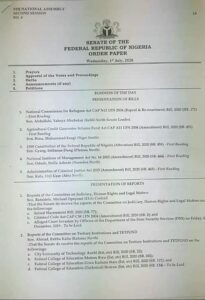 GOD HAS BLESSED ME, I WILL CONTINUE TO BLESS OTHERS ! *Amb. Bishop Emeka Nwankpa declares as he gifts a 6 – bedroom bungalow