The year 2022, penultimate to the election year 2023 is a year of great happenings for Ngwaland, Abia State and Nigeria. 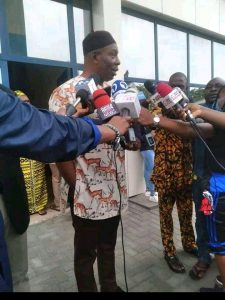 For Ngwaland, this is the year an Ngwaman first aspired to the presidency of Nigeria under the umbrella of any political party at all.
For Abia State, it is a year that a former speaker of the Abia State House of Assembly for the first time aspired to lead Nigeria.
For Nigeria, it is a year the nation is having a great visionary leader who believes in responsible leadership, but whose name has never featured in national politics aspiring to the presidency of the country. 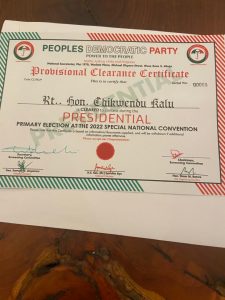 The phenomenal aspiration of Rt Hon Chikwendu Kalu to the presidency of Nigeria took everyone by surprise, albeit a pleasant surprise. For informed commentators, it is an exceptional step of courage never known in the history of Abia State and the South East of Nigeria.

It is gratifying to know that the Peoples Democratic Party has screened and found Rt Hon Chikwendu Kalu qualified to contest the office of the president. He now stands among other aspirants to compete for the presidential ticket of the party.

Given the strong values and a track record of service for which he is renowned, Rt Hon Chikwendu Kalu stands an unquestionably bright chance of winning the party primaries and equally winning the presidency of Nigeria in the presidential elections come 2023.

One of his striking qualities is his strong belief in the youth. Thus, he has always created opportunities to interface with them and champion a cause for Youth Empowerment and value reorientation.

As a legislator, he has not failed to carry his constituents along, all the way. Thus, he has, in the past years, attracted development projects including school blocks, rural roads, Primary Health Centers, scholarships for students among others. This of course is in addition to his premium performance of his primary legislative responsibilities on the floor of the Abia State House of Assembly.

Interestingy, Rt Hon Chikwendu Kalu’s name is already becoming a household name among the electorate nationwide, especially among the delegates that will vote at the primaries to elect flagbearers. Therefore, his swift and resounding journey to victory is not in doubt.

For the delegates, one of the greatest gifts they can give to Nigeria and humanity in general is to elect Rt Hon Chikendu Kalu as the PDP flagbearer.
For the electorate in general, one of the most priceless gifts they can give to your children and future generations is to get your voters cards, and vote in a man whose time has come, into the presidency of the country.

He will, no doubt, replicate and multiply the great work he has done in his current office at the national level.

As a people, Ngwaland is proud of Rt Hon Chikwendu Kalu for taking this big leap. As a state, the story of the courage displayed by this illustrious son of the state will always elicit pride as it reverberates across the length and breadth of the state.

It is for our own good as a country that he coasts to victory eventually. The current challenges facing the country, especially in the areas of the economy, education and security are sure to receive decisive attention.

To God be the glory

ABIA 2023: Why Ncheta Omerekpe Is Best To Take Over From Gov. Okezie Ikpeazu Posted by News Mirror, April 19, 2023