REVEALED: Identities, Photos Of Some Nigerian Soldiers Killed By Bandits In Niger State

Photos and identities of some of the over 30 Nigerian soldiers killed by gunmen suspected to be bandits during a gun battle with terrorists in Niger State have been revealed. 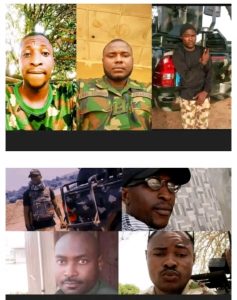 Residents said a search party found 30 bodies of soldiers and an unconfirmed number of policemen in a bush near the mining site Thursday morning.

“The death toll of Ajata – Aboki massacre of Shiroro L.G. Niger State have risen astronomically as at present, almost thirty soldiers have been discovered in the bush and confirmed dead,” Co-convener, Concerned Shiroro Youth of Niger State, Sani Kokki, had said in a statement.

“It is extremely sad and demoralising to lose such huge number of patriotic citizens and gallant officers at the war front. Speedily, we are being depopulated by marauding terrorists. More are still expecte