There was temporary unrest in some northern states; Katsina, Bauchi, Kano and Abuja, on Friday, following peaceful protest by some aggrieved people, mostly women over unending killings in northern Nigeria. 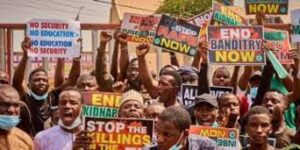 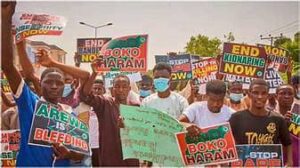 There are indications that people from Kaduna, Gombe, Yobe and Kebbi states would join the protest today (Saturday), while Sokoto and Zamfara states would join once they are done with the necessary arrangements.

In Abuja, the aggrieved young women and men converged at the Unity Fountain, Abuja, bearing placards with several inscriptions written in Hausa Language, chanting solidarity songs to call for local and global attention on the ongoing “genocide” in northern Nigeria.

The women vowed to continue the protest next week access until realistic solutions are provided by the government to end the growing banditry and other criminal activities that had crippled the economy of the north and had led to the death of thousands of people, and communities destroyed.

The Convener, Rahama Abdulmajid, said they have kept quiet enough about the ongoing “armed war” in northern Nigeria, hence their decision to raise local and global attention to the insecurity in the north.

“We are out this time to raise global attention on the level of human carnage going on in northern Nigeria. Evidently, lives are not long valuable in Nigeria. People are being slaughtered daily like chicken and nobody is saying anything about it. We are tired of these killings and we will continue this protest until steps are taken to end this.

“Today (Friday), the protest was successfully held simultaneously across four northern states of Katsina, Bauchi, Kano and Abuja. On Saturday, there will be similar protest in Kaduna, Gombe, Yobe and Kebbi. Sokoto and Zamfara states are still making arrangements for theirs. In no distant time, we, the 19 northern states, would all assemble for joint protest. We would continue this protest until we see concrete action to end this killings going on in northern Nigeria,” she said.

One of the protesters, Zainab Binti Hijazi, however said that gradually, people are becoming more confident, bold and confrontational against harassment and intimidation of the police against protesters who are peacefully seeking justice.

She said: “People have been afraid to speak truth to the government on the level of daily unreported or underreported killings in northern Nigeria. But I think we can’t take that any more. We are out here to take our destinies in our own hands. It’s better we die with our dignity intact than to be slaughtered like chickens as being experienced in some communities where people are killed in their sleep, markets, roads, and other locations recklessly.”

She suggested that government use loans being procured from foreign countries and other financial institutions to purchase modern arms and other weapons to prosecute the war against banditry in the north.

“We appreciate the efforts of the President in the fight against insurgency. He should drop every other thing on his table and face the issue of insecurity before we are all consumed. We didn’t elect him to inflict economic pains on us neither was he elected to increase fuel price, VAT and other things,” she added.

She advised government to reduce the huge presence of security officials attached to VIPs and unnecessary locations like the Unity Fountain, Abuja, and redeploy them to areas that require their services after relevant trainings.

“When we came to start this peaceful protest, they confronted us and denied us entry. They insist that we are not allowed to carry out protest in the place. After several confrontations, they allowed us but rejected the option of going beyond the Unity Fountain to, maybe, Three Arms Zone for whatever reason.

“However, we would not relent. We would continue this protest because armed enemies have risen against our communities and the people, and we should take action to defend ourselves, otherwise, we would wake up one day and discover that we have lost our inheritance to criminals,” she explained.

Meanwhile, a security expert, Dr. Yahuza Geso, who was part of the first day of the protest, lamented the level of wickedness against people in the north by bandits most of whom he alleged are known to the government.

He said, “we have said it repeatedly that if government claims not to know these people, we would show them where they are as long our identities are protected. There about 126 towns and villages that I know, you can’t move a kilometer without seeing somebody hanging AK-47 riffle on his shoulder.

“Few days ago, some travellers were burnt alive inside the bus they were traveling with. It may interest you to know that the people that were burnt in that bus in Sokoto were fleeing refugees whose original inhabitation was destroyed by the criminals in some parts of the north.”

He expressed confidence in the capacity of the government forces to tackle the security challenges, but pointed to the fact that most of the security agents drafted to fight the war lack the necessary motivation, welfare and other things that would boost their morale and encourage them to confront the criminals.

He, however, disclosed that the criminals have begun to recruit children from the IDP camps and other local communities whom they train for further criminals, adding that “many of the elites in the north have ran to hide in Abuja, Lagos and other ‘safe’ locations but I can confirm to you that no one is safe anymore because Abuja is also feeling the heat of the insecurity.”

He assured government of citizens’ support if only they would be sincere in their approach against the criminals, stating that “for instance, people have volunteered information in the past but there were exposed by the security agents, thus endangering their lives. These are discouraging factors.”

It will be recalled that on Thursday, the Sultan of Sokoto, Muhammadu Sa’ad Abubakar, raised the alarm that northern Nigeria was fast turning to killing field by armed bandits and other terrorists operating in the region.

The Sultan who spoke in Abuja, at the opening ceremony of the fourth quarterly meeting of the Nigeria Inter-Religious Council (NIREC), with the theme ‘NIREC, Security Agencies and Peace in Nigeria’ indicated that the bandits are holding the region spellbound especially northwest, and accused elites of being responsible for the unending security challenges in Nigeria.

The Sultan lamented that terrorists unleash terror on communities and kill people on a daily basis in north “freely”, and should be stopped forthwith, emphasizing that, “evidently, Nigeria is faced with series of challenges, and if leaders doesn’t wake up, come together to understand the issues facing the country, the challenges might escalate and possibly consume all.

“Let’s not deceive ourselves, everything is not alright in our country, and I have spoken about repeatedly in different fora. To know that you have a problem means you have part of the solution. The earlier we rise to the occasion, come together, the better for us,” he added.

The Sultan reminded some religious leaders of the enormous respect, loyalty and followership they command, adding that they should guide their utterances and actions particularly towards their followers to avoid unnecessary bitterness and incitement.

“We have to be careful in the way we handle, say and do things as religious leaders. We are not political leaders, and therefore, we have to be weary of what we say, where and how we say such things, because our followers will definitely believe in what we say and feel that it is from the Holy Koran or the Holy Bible,” he said.

President, Christian Association of Nigeria (CAN), Dr. Samson Ayokunle Olasupo, in his remarks, complained about the activities of kidnappers and other criminals on Nigerian roads.

“Travelling on Nigerian roads has become a very great risk now; kidnapper are everywhere and they don’t only come out to kidnap but also to kill. So, you don’t know who the next victim is going to be.

“Why should these people be killing and hiding people in our territory without being challenged? Why should it be easy for them to hide people somewhere within the state and the security agencies in the state within few days or weeks will not be able to fish them out?” he queried.

The CAN President who is the Co-Chairman of NIREC, thus, advocated intelligence gathering to tackle the challenge.

He advised Nigerians to volunteer information to the security agencies so that the movement of criminals could be traced and apprehended ahead of time.