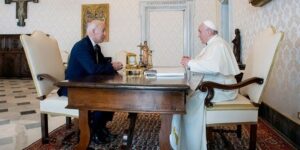 President Joe Biden received Communion during Mass Saturday evening in Rome, according to a report from the Associated Press. 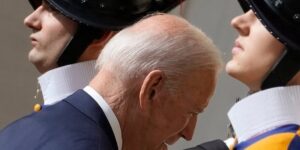 Biden met with Pope Francis on Friday, during which, he says, Pope Francis told him to “keep receiving Communion,” despite his views on abortion.

According to the A.P., about 30 people attended the Mass at St. Patrick’s Catholic Church, which had a large security presence. The president and his wife sat in the last row.

The report stated that Mass was celebrated by Father Joe Ciccone and two concelebrating priests, and that Biden was seen putting U.S. currency in the collection basket.

“Communion is what brings us together in the Lord. None of us are pure and perfect. We struggle through life. We’re all saints and sinners,” the celebrant, Father Joe Ciccone, told the A.P.

“When you’re a public figure you have to make certain decisions, especially in a democracy, on behalf of more than just your own personal feelings,” Ciccone said.

St. Patrick’s Church is located near the U.S. Embassy, and is the main place of worship for many Americans in Rome. The church, which is within the pope’s archdiocese, offers all Masses in English.

It is the same church Nancy Pelosi attended when she visited Pope Francis earlier this month. Pelosi and her husband left Mass on Oct. 9, before the second reading because of a security incident.

Biden is in Rome for the G20 Heads of State and Government Summit. He met with Pope Francis for 75 minutes on Friday, during which they did not discuss abortion, Biden told reporters afterward. Biden said that he and the pope prayed for each other and discussed climate change.

“We just talked about the fact that he was happy I was a good Catholic and I should keep receiving Communion,” Biden said.

Unlike past meetings between the pope and a head of state, the Vatican did not allow media to be present when Biden and Pope Francis met. No video live stream was provided.

Biden, the second American Catholic to become president, has supported taxpayer-funded abortion during his first year in office, and has issued statements in defense of legal abortion, sparking calls by some bishops and other Catholics to bar him from receiving the Eucharist.