After extending his time in office by three more months, Buhari is willing to buy the nation’s police chief some more time. 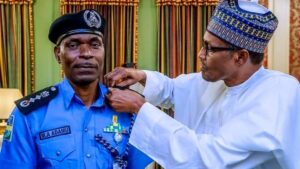 President Muhammadu Buhari has agreed with Inspector General of Police (IGP) Mohammed Adamu, who submitted in court a couple of weeks ago that he can well remain in office until 2024.

In February when his term as the nation’s police chief was due to elapse, President Buhari extendedAdamu’s tenure by three more months, saying he needed the additional time to shop for a capable replacement.

In a suit marked FHC/ABJ/CS/106/21, Maxwell Opara,a lawyer, dragged the IGP to court, arguing that by virtue of section 215 of the Nigerian constitution and section 7 of the Nigeria Police Act, 2020, Adamu has no business carrying on as IGP beyond February 1, 2021.

However, through his counsel, Alex Iziyon, the IGP argued before the federal high court in Abuja that the new Nigeria Police Act has handed him a four-year tenure, which elapses in 2023 or 2024.

In a joint response filed on their behalf by a lawyer in the AGF’s office,Maimuna Shiru, Buhari and Abubakar Malami who is the nation’s Attorney General, stated that they agree with the argument put forward by the IGP’s lawyer.

“My Lord on the above issue, it is our position that we will be relying and aligning with the argument canvassed by the 2nd defendant’s (IGP’s) counsel as their Issue Two in paragraphs 1.18 to 1.49 of their written address and we shall be adopting same as ours and urge this honourable court to uphold our argument and dismiss the plaintiff’s case as same is frivolous,”their written address reads in part.

They also stated that the Nigerian Constitution conferred on the president the executive power to “appoint a serving police officer as the Inspector-General of Police in consultation with the Police Council.”

They also argue that neither the Nigeria Police Council nor the Police Service Commission “have disclosed any contrary fact that the 2nd defendant is not a serving police officer.”

The president and his AGF also posit that the plaintiff “has failed to discharge the legal burden of proof that the 2nd defendant is not a serving police officer for the purposes of extension of his tenure in office.”

By way of conclusion, they urged the court “to dismiss this suit and uphold our argument in support of the view that the case of the plaintiff is frivolous, unmeritorious and undeserving of the time of this honourable court’s attention”, while also demanding that the court awards“heavy cost” against the plaintiff.