A former two-time member of the National Assembly, Senator Dino Melaye, has thrown a jibe at his political archrival and Kogi State governor, Yahaya Bello, saying the governor cannot be Nigeria’s president. 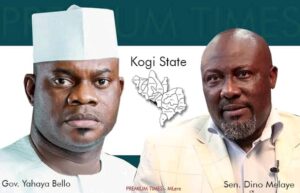 Melaye represented Kogi West senatorial district in the 8th Senate from 2015 to 2019. He was reelected in 2019 until the Court of Appeal annulled the election and ordered for a rerun, which was eventually won by Smart Adeyemi of the APC, who was backed for the contest by Governor Bello in December 2019.

Ironically, Melaye was one of the few politicians instrumental to Bello’s emergence as governor in 2015 before the duo fell apart afterwards.

The ex-Senator took to his social media pages on Saturday describing Governor Bello as a failure apparently in response to the latter’s presidential ambition.

Melaye wrote: “Governor Yahaya Bello cannot climb the ladder of success dressed in the costume of failure. You can only be the president of Agasa Development Union in Okene. Yeye dey smell. SDM.”