Presidency 2023: If INEC deploy BVAS, APC is out of the race – Primate Ayodele. * Calls for the release of Nnamdi Kanu

The man of God in-charge of Inri Evangelical Spiritual Church, Lagos, Primate Babatunde Elijah Ayodele, has said that only restructuring would help Nigeria to overcome the challenges confronting her as a nation. 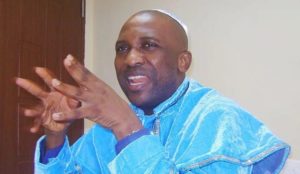 He, however, revealed that none of the leading presidential candidates vying to lead the country in 2023 would be able to defeat the forces behind the inability of successive governments to restructure the country.

Primate Ayodele who made this revelation in Lagos on Friday, said that no government would be able to muster the courage to carry out restructuring in the country while those powerful individuals against it are still alive.

According to him, “restructuring is the answer to Nigeria’s challenges. But I don’t see any of the presidential candidates being able to restructure Nigeria now. If they say they are going to restructure, they are telling a lie. There are evil forces behind successive governments’ inability to restructure. No president will restructure the country when those leaders who are against restructuring are still alive. Some people have to die to have a new Nigeria. If those people holding Nigeria to ransom are still alive, Nigeria will not progress.”

Speaking on the 2023 presidential election, the man of God said that the outcome of the election will be shocking, saying that in politics, Nigeria is pregnant. In 2023, the unexpected is going to happen. I do not have any favourite candidate among those who are contesting. But God revealed to me that if Atiku wins the presidency, Nigeria’s economy will improve and if the APC candidate, Tinubu, gets the ticket, Nigeria will be a little better. If the Labour Party wins the presidency, it is going to be a government for the poor where the rich will be complaining. PDP government will be for the poor and the rich, the elite under APC government, but the grassroots will enjoy it including the uneducated.

“I see that northern power brokers are divided over Peter Obi of the Labour Party, Abubakar Atiku of PDP and Bola Tinubu of APC. Some Northerners love Obi, some love Atiku and some emirs love Tinubu. I don’t see any past leaders supporting Tinubu’s ambition. I see northerners betraying Tinubu and people within his party, people who are close to him, will also betray him.”

Speaking on how the three leading political parties will perform at the presidential poll, Primate Ayodele revealed that the Labour Party would spring surprises in some states considered as the strongholds of the ruling APC and the leading opposition, PDP.

“There are states where the APC, LP and PDP will fight to win. Lagos is for APC, but LP cannot be brushed aside in Lagos and may spring up surprises in some areas. Anambra State is between PDP and LP. In Kwara State, it is between APC and PDP. PDP may spring a surprise in Kwara except APC sits up. APC should not underrate Bukola Saraki now because what PDP is doing in Kwara in terms of mobilisation is what APC had done before to win the state.

“In Osun State, it is between APC and PDP. I don’t see the Labour Party in the equation. I don’t see Kwankwaso’s NNPP making any progress. He is just wasting his money and energy. He can only get a few National Assembly members and maybe local government chairmen.

“Above all, INEC must use BVAS for the election, otherwise, Nigerians will be disappointed and they will suffer three times what they are suffering under this present government. With BVAS, APC is out of the race because it will be difficult for any party to rig itself into power. With BVAS, the election rigging will be minimal as BVAS will checkmate rigging. So says the Lord,” he revealed.

The popular seer also admonished Nigerians to pray fervently for the security of the country and called on the Federal Government to release the detained leader of the Indigenous People of Biafra, Nnamdi Kanu, saying that his continued incarceration does not bode well for the nation.

His words: “The spirit of God says the Nigerian government must release Nnamdi Kanu because the issue of the detention and prosecution of Nnamdi Kanu would raise a lot of eyebrows in the polity. I foresee that a crucial path to ensuring the restoration of peace in the eastern part of the country is to release Nnamdi Kanu or else IPOB will begin to attack strangers and continue to threaten the northerners.

“The time for the Igbo to rule Nigeria is now. Nigeria will still break but not now. I foresee an Igbo will still become president before then. And the 2023 election will be held, but I see the date of election being changed. The Yoruba nation people will discourage their members from boycotting the election. Biafra Republic will come to pass. Oduduwa nation will come to pass; it is only the North that will stay in Nigeria. Keeping the IPOB leader in prison continuously will threaten Nigeria’s security.”