Pope Francis leads Mass on Christmas Eve in St. Peter’s Basilica amid the COVID-19 pandemic at the Vatican

The event was made somber by the coronavirus pandemic, and the pope said people should feel obliged to help the needy because Jesus himself was born a poor outcast. 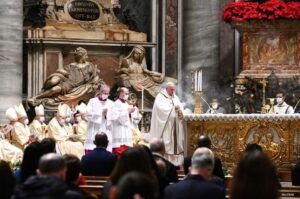 The Mass was held in a rear section of St. Peter’s Basilica with fewer than 100 participants and only small number of cardinals and bishops. It is usually held in the main section of the basilica and attended by up to 10,000 people, including the diplomatic corps representing nearly 200 countries. 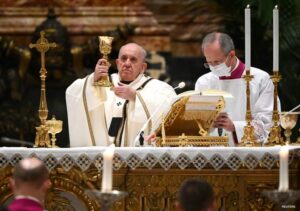 Everyone except the pope and the small choir wore a mask during the Mass, which began two hours earlier than usual so that even the limited number of people who attended could return home by a 10 p.m. curfew. 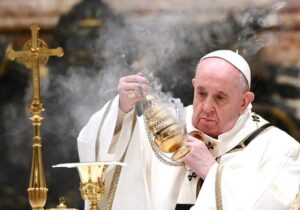 Italians are under a nationwide lockdown for much of the Christmas and New Year holidays.

The restrictions mean people will not be able to go to St. Peter’s Square or the basilica. All papal events between Dec. 24 and Jan. 6 are taking place indoors with little or no public participation and being live streamed on the internet and broadcast on television.