A call has been made to the Commissioner of Police, Abia state command to tame his men as the harrasment of media professionals by security agents is obviously on the increase with the case study of what happened to AFNews (Abia Facts Newspaper) reporter today on his way to work. 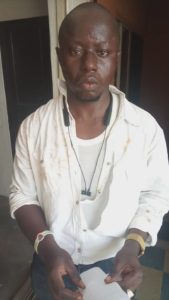 AFNews reporter by name Thompson Nsisiongabasi was on his way to work today from Ahiaeke axis, when he got to Orpet junction in Umuahia, he saw people running not knowing that Police Officers and Civil Defense officers have had a face off at the junction.

Police officers led by one Inspector Sunday Daniel rounded up Thompson and accused him of recording them, meanwhile Thompson’s phone was down since last night due to power failure.

He quickly identified himself as a journalist, but they ignored his identification and started beating him up to a point that blood started running out from his nose.

The police officers also collected his dead phone and seized it.

When a superior officer arrived, Thompson approached him and laid a complain, the said Inspector Sunday Daniel acknowledged beating the journalist, but also denied collecting his phone.

We are hereby calling on the Commissioner of Police in Abia State to immediately investigate the matter and bring to book the dishonorable Inspector Sunday Daniel or we will seek a legal means to address the issue.

MAN ARRESTED IN NSUKKA FOR ARRESTING THEIR VILLAGE god (DEITY).

Wike: I’ll resign if Amaechi mentions one thing he has done for Rivers as minister