The Police in Enugu State have arrested a suspect for allegedly poisoning about 143 bags of garden eggs at a popular market within Enugu metropolis.

The Command’s Public Relations Officer, ASP Daniel Ndukwe, said this in a statement made available to the News Agency of Nigeria (NAN) in Enugu on Saturday. 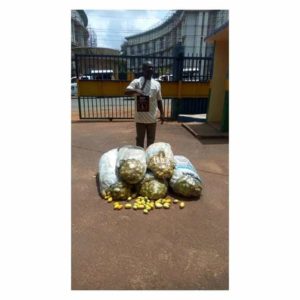 Ndukwe said that the suspect was carrying out his nefarious activity at Akwata sub-market of the Ogbete Main Market in Enugu.

He said that the suspect was apprehended on April 8 at about 2 p.m. by police operatives from Central Police Station, Enugu.

“Following a report, police operatives attached to the station arrested the suspect for allegedly emptying a can of a suspected toxic liquid substance on loads of garden eggs at Akwata sub-market of the Ogbete Main Market, Enugu.

“Investigation to ascertain the real motive(s) of the suspect as well as apprehend and prosecute his accomplices to the crime is ongoing at the State Criminal Investigation Department,’’ the police spokesman said.

Ndukwe said that the state’s Commissioner of Police, Mr Ahmad Abdurrahman, commended the efforts of the dogged officers, security stakeholders and law-abiding citizens of the state for the collaboration and support that made the arrest possible.

He said that the commissioner had always reiterated his commitment to always get tough on unrepentant criminal elements in order to achieve maximum public security and safety in the state, especially in these trying times of the COVID-19 pandemic.

He said; “To this end, the commissioner has charged all Area Commanders, Divisional Police Officers and Heads of Tactical/Operational Departments of the Command to redouble their efforts and be resolute in curbing crimes and criminality in the state.

“The peace-loving citizens have been called upon to promptly report suspected criminals and acts of criminality to the nearest police station or by contacting the Command on 08032003702, 08075390882 or 08086671202 or by sending electronic mails to contact042ppro@gmail.com”