Oyinlola, Akinbade, others back in PDP * Return is winning signal 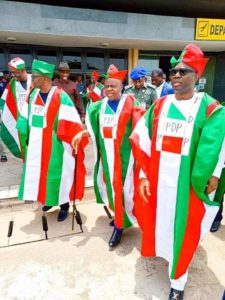 A unification rally in Ibadan, Oyo State, was attended by party leaders from Oyo, Osun, Ondo, Ogun, Ekiti and Lagos states. The party wooed interested politicians to join its fold as it ‘is corona-free’.

The rally held amid heavy security presence on roads leading to the famous Mapo Hall. 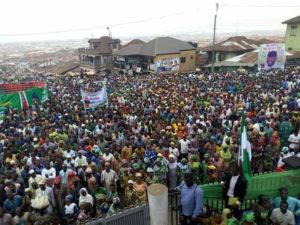 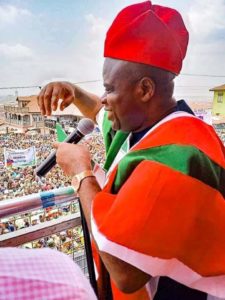 Addressing the returnees, Oyo State Governor Seyi Makinde said the rally was part of efforts to ensure the party’s unity in the region.

He stressed that if all was well with the Southwest, all will be well with Nigeria.

Makinde said: “This rally is important to us; it is the beginning of our unity. If Southwest is peaceful, the country will be peaceful. We welcome our brothers and sisters from APC, ADP, ZLP, SDP and ADC.

“I want you to take home two words – the first is they said we shouldn’t hold this rally because of Coronavirus, but it is their boss himself that said there is Coronavirus in their party. There is no Coronavirus in our party. May we not be plaqued with the virus. 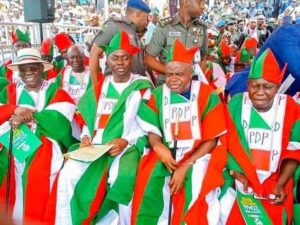 “Secondly, last week some people went to demonstrate in Lagos that they don’t want Amotekun. Yesterday, they also went to Ekiti State for the same demonstration, are they good ambassadors of the Yoruba race?

“We want Amotekun and Amotekun has come to stay in this state and in this region. Let us show love to those who have come to join and rejoin us, and all our leaders who have returned to the party. We welcome them all.

“Finally, I assure you all that we will reap from the party and in the region. I thank party members in the state and region, you have promised to support me always and you have also done that.”

Former Deputy National Chairman Chief Bode George said the PDP was open to everybody because it had no virus infection, but working to harmonise its home ahead of the next election.

He said: “The party is ready to sweep Southwest and I am sure that will be the same thing all over the country; and this is just the beginning. If their leader declared publicly that Coronavirus is in their party, who wants to catch virus? It’s a plague. We have no virus in our party; let people who are ready and willing join our fold.”

Former Osun State Deputy Governor Erelu Olushola Obasa said: “We are grateful and happy for today’s unification rally. It is the beginning of a new rebirth for the party in the region. In the next election, PDP will reclaim its lost territories in the region. We are reclaiming the Southwest with the return of the bigwigs into the party …”

Elder Yemi Akinwonmi, who received the returnees, said their action was a good omen for the party. He urged them to start working so that it would have a good outing in the next elections.

Oyinlola, who spoke for other returnees, said he decided to return to PDP because of the deceit he discovered in APC. According to him, the people fell for APC’s promise of restructuring but the party failed to fulfil its promise.

He said: “With the level of politics and governance in the country, I don’t think APC is doing the right thing. The party promised restructuring during elections, but after winning, it doesn’t seem to understand that anymore.

“They know how to take care of their selfish interest at the expense of other people. For this reason, I say it is time to restructure politics in Southwest because we cannot be working like elephants and eating like ants.”

Southwest Chairman Eddy Olafeso said the gathering showed party leaders were working to put the house in order ahead of 2023 elections.

He added that Oyinlola and his supporters would provide the energy to win elections.

A statement by his media aide, Sam Segun-Progress, urged Oyinlola to use his influence to attract members.