Bandits again on Sunday struck in Kaduna State, killing one person and abducting four others when they attacked Haske Baptist Church in Mannai Tasha village in Kuriga ward of the Chikun Local Government Area of the state. 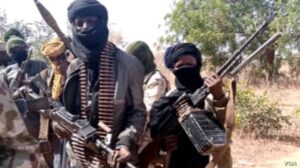 An eyewitness, Yakubu Bala, told one of our correspondents that the bandits invaded the church at 9am.

The attack has been condemned by groups including Ohanaeze Ndigbo, the Middle Belt Forum and the Southern Kaduna Peoples Union.

SOKAPU, which lamented the high level of insecurity in the state, said in 2020, families in Southern Kaduna paid N1bn to free their abducted relatives.

The attack on the church was the fourth major assault by gunmen within a week in the state.

Recall that bandits on Tuesday night attacked the Greenfield University, along Kaduna-Abuja road killing a staff member and kidnapping 23 students.

Three of the students were killed on Friday and their corpses dumped close to the school.

SOKAPU added that, on Friday to Saturday, 65 people were kidnapped at the Adara community in the Kajuru Local Government Area of the state, when gunmen attacked the area on Tuesday.

Only 10 out of 39 students of the Federal College of Forestry Mechanisation in the Afaka area of the state, who were abducted on March 11 have been released.

On Sunday, it was learnt that the attack on the Baptist church took place when the church was conducting a service.

The eyewitness, Bala, said, “Zakariah Dogo Yaro, a medical doctor with the Kaduna State Ministry of Health was shot dead.

“As I am talking to you now, we have not seen some of our villagers who ran into the bushes while the shootings were going on.”

But later on Sunday, the state police command confirmed the bandits’ attack.

The command’s Public Relations Officer, ASP Mohammed Jalige, who confirmed the attack, said that only four worshippers were abducted by the bandits during the attack.

The Police Spokesman said, “Today 25th April, 2021 at about 0900hrs the command received the unfortunate report of bandits’ invasion of Manini Tasha village of Kuriga ward in the Chikun LGA of Kaduna State.

“The report has it that the bandits in large numbers bearing dangerous weapons invaded the village and shot sporadically which resulted in people scampering for safety in different directions.

“Preliminary investigation conducted so far revealed that four persons are missing which arouse a suspicion that they might have been kidnapped by the hoodlums, while two others sustained gunshot wounds, namely Dr. Zakariya Doga Yaro, a member of staff of Kaduna State Ministry of Health attached to the Primary Healthcare Center in Rimi village in the Chikun LGA and Shehu Haruna. Unfortunately, Dr. Zakariya Yaro died on the spot while Shehu Haruna is currently receiving medical treatment.”

On its part, SOKAPU said Kaduna State under Governor Nasir El-Rufai was fast becoming a “paradise” of sort for bandits that kidnapped people on a daily basis.

SOKAPU’s spokesman, Mr Luka Binniyat, in an interview with correspondents in Kaduna, said, “Kaduna State is unarguably Nigeria’s kidnappers’ paradise. It is also the safest place for arsonists and violent land grabbers. There doesn’t seem to be any serious attempt at uprooting them, especially in Southern Kaduna.

“It is sad that only published kidnapped cases are given attention by the public, but they constitute just a fraction of that crime going on in the state.

“In our press statement of 23rd April, 2021, we affirmed that 65 Adara natives from Libere Gida, in Kallah ward and Kajuru ward were kidnapped last Tuesday night. 55 are still with the abductors after 10 managed to escape.

“The remaining 29 students of Federal School of Forestry, Afaka, Kaduna are still with their kidnappers for over 40 days now. They are now threatening to kill the males and marry off the girls if N500m ransom is not paid.

“Of course the kidnapped students of Greenfield University, Kasarami, in the Chikun LGA in Southern Kaduna are still hostages of their kidnappers after three of them were killed in cold blood. The murderers are asking for N800m in exchange for their freedom.”