Let us commence with a prayer for the soul of the departed First Lady of the defunct Eastern Region, Lady Adanma Okpara, to rest in peace. It is the norm to do so, especially when the deceased is believed to have led a worthy life and had attained good age. This should be the case with the widow of the late Premier, Dr. Michael Iheonukara (M.I) Okpara, who died on Sunday, August 22, at 97. But is she resting in peace? 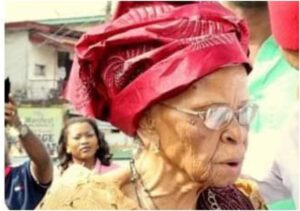 We will return to this, shortly.

In life, the late First Lady, epitomized humility and simplicity, two virtues that shielded her from undue publicity to the point that not many reckoned that she had been around since 1966 when her husband was forced out of office and since 1984, when she lost him.
Perhaps her humble carriage had bearing on her training; she was a trained teacher and typical housewife. But more importantly, she lived her full name: Adanma Michael Okpara – a trinity of excellence and service.
Adanma, for want of precise translation, is an ‘Adorable Daughter’, saddled with the task of nurturing her siblings. Michael, the husband, complimented it. For the Catholics, Michael is the Arch Angel, the guardian spirit that comes handy at the hour of need. ‘Okpara’, In Igbo cosmogony, is the first son, the pillar on which the family rests. Adanma and M.I complemented these roles in commendable measures.

Exciting reminiscences continue to surge on the Eastern Region under their watch. You may not fully appreciate the iconic feats of the Okpara administration unless you take the story from the low level the late Premier picked the Region on coming to office and where he hoisted it in 1966; literally lifting the area from near ground zero, to the fourth fastest growing economy in Africa and British Commonwealth.
This was a product of conscious planning, anchored on the consolidation of the Department of Agriculture, Fisheries, Forestry and Veterinary Services and Produce Inspection into a Ministry of Agriculture (MOA). The establishment of the MOA heralded the formulation of an elaborate agricultural policy aimed at maximising productivity through prudent management of the natural assets of the region. The strategy entailed allocation of a significant part of the development budget to agriculture on conviction that the sector was the most important route to economic development and increased welfare for the people. And it paid off!

The ambitious programme, often referred to as the ‘Okpara Revolution’, found expression in large-scale state plantations, in addition to peasant production. The result was the region growing in wealth and esteem. In a short while, such industries as Enamel Ware Factory, Port Harcourt, Hotel Presidential in Enugu, Port Harcourt; Aba Textile Mills, Modern Ceramic factory, Umuahia, Catering Rest House and Modern Shoe factory, Owerri, had sprang up, offering employment to the people and revenue to the region. In addition, a cement factory was established at Nkalagu, Nigerian Breweries established a plant in Aba, a Tobacco and glass making plant was located at Port Harcourt. In the same Port Harcourt, Trans-Amadi Layout was set out as the industrial hub of the Region.

Foundations were laid for Calabar cement factory and a giant textile mill in Onitsha. Permatex spinning and weaving company was soon to take off in Enugu, while Sunray flour mill and a vehicle assembly plant, were established in Port Harcourt. Cashew and Palm oil plantations as well as Extension farms sprang up in different parts of the region.
The beautiful vision was garnished with well-paved roads, streets and residential quarters in the metropolitan cities of Aba, Owerri, Umuahia, Enugu, Calabar, Port Harcourt, Abakiliki and others.

In all these, Adanma’s support counted immensely. Newspaper proprietor and one of Nigeria’s freedom fighters, who knew the Okpara family at close range, Bob Ogbuagu, told us, before his death, that M.I could not have achieved much without the encouragement from Adanma, whom he described as the “unseen power behind the throne”. Abia state governor, Dr. Okezie Ikpeazu, Senate Minority Leader, Enyinnaya Abaribe, pioneer chairman of All Progressives Grand Alliance (APGA), Chekwas Okorie and others who have spoken on her demise, concurred. The sea of encomia should earn her deserving rest, after all, it is said; “Vox Populi, Vox Dei” (the voice of the people, is the voice of God).

But this is where the question arises on whether Adanma and by extension, M.I would be resting in peace! The desire of every parent, is to have a child of greater substance and impact. For the larger East and in particular, the South East, which Adanma is leaving behind, there is not much to cheer. What we have is a caricature of an entity which the literary giant, Chinua Achebe, had once, said, started off with initial geographical and historical obstacles but with one fantastic burst of energy, overcame the handicap and overtook its peers.
In place of development and good governance which Adanma and M.I bequeathed to the people, the region has been afflicted with men and women who parade the corridors of power without adequate preparation for leadership. The projects put in place by the Okpara administration, are in various stages of dilapidation or outright disuse. Nkalagu Cement has gone under, Hotel Presidential Enugu, in disuse. The plantations are abandoned and converted to hideouts by criminals. The once, beautiful cities in the region, have turned to slums. Aba, in particular, is a study in betrayal of trust in leadership. Worst of all, the zone has lost its placid atmosphere to armed gangs and amorphous groups.

It pains indeed, that since the era of Okpara and the flashes of brilliance exhibited by Dr. Sam Mbakwe (Imo) and Jim Nwobodo (Anambra) in the second republic, most of their successors, can at best qualify as passengers foisted on the drivers’ seats in their various states. Whether we admit it or not, the pervasive rot in the present day south east has a lot with the questionable leadership recruitment process that has regularly thrown up charlatans as managers of the affairs of the region.
Adanma could not have been happy with the situation, though she was not given to raising her voice to attract attention. She must have been certainly pained at the state of the region her husband had spent his life serving.
The late First Lady and her husband, never owned a house of their own while in government. At Okpara’s death in 1984, the roof over their heads was put together by the friends.
But right there in Abia and Imo, Okpara’s immediate backyard, are former governors being tried for corruption and callous diversion of the resources of the resources of their people. The trend replicates in other states in the defunct region. There was no how the late First Lady would be at peace in all these.
But she has played her glorious role. In her was captured the insightful remarks by Henry Wadsworth Longfellow, that; “Lives of great people remind us we can make our lives sublime and, departing, leave behind footprints in the sand of time.” It is well with her soul.

DURU is the Editor of TheNiche Newspapers, Lagos