Vice President Yemi Osinbajo has expressed sadness over the death of Ojima Omale, a young Nigerian who used to make shoes for him. 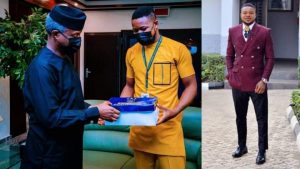 The young designer went viral after tweeting at Osinbajo about his products and making shoes for him, with th vice president eventually getting in touch with him.

Omale’s death was announced on his Twitter handle on Sunday evening.

The tweet read, “PAINFUL EXIT!! Call to Glory, the CEO of OJBest footwear is dead.”

“I am deeply saddened by the news of the sudden death of Mr. Ojima Omale, aka OJBEST, 28, my young enterprising shoemaker and friend,” Osinbajo said on Monday.

“Omale was CEO of O.J Best Footwears. He was talented, creative and dedicated to his craft. I never ceased to be impressed by his exertions for perfection in his products.

“I and many members of my team, for whom he also made shoes, will miss him, his services and unfailing good humour.

“Our thoughts are with his family as we pray that God will comfort them. May his memory remain blessed. Amen.”