Since 1999, Nigeria has had five chiefs of staff to the president: Abdullahi Mohammed, Gbolade Osinowo, Mike Oghiadomhe, and Jones Arogbofa, but none wielded as much influence as Abba Kyari, who lost the battle to the coronavirus disease on Friday. 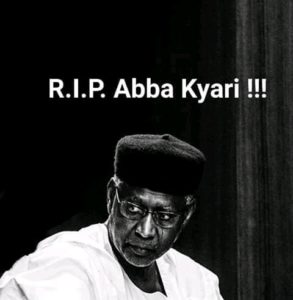 When in August, President Muhammadu Buhari asked ministers who want to meet with him to channel their appointment requests through Kyari, this caused a stir but Garba Shehu, presidential spokesman, had said Kyari was Buhari’s adviser “on any and all matters.”

Kyari was a man of many parts. From law to sociology, banking, journalism, oil and gas, and public administration, he indeed had his foot set firmly within many sectors.

HE WOULD HAVE BEEN A SOLDIER

In a tribute he wrote to Ibrahim Tahir, the talban of Bauchi, his close friend who died in 2009, Kyari narrated how he would have joined the army.

“After my secondary education at St. Paul’s College, Wusasa Zaria, Dr. Ibrahim Tahir and Mal. Mamman Daura advised that I consider joining the army. That effort took three years and was taking a political dimension.

“When I decided to continue with my formal education, it was already September 1974. I applied to the then Cambridge Tech for my A levels, just as the session was about to begin. It was of course late. Mal. Mamman advised that I inform Dr. Tahir, who was back in Cambridge writing his doctoral thesis. I did and within a couple days, he had obtained my admission! That opened the door for my intellectual development,” he wrote.

Kyari did well to keep details of his private life well away from public eyes. TheCable has not been able to ascertain his age, although he was below 70 at the time of his death. His wife, Hauwa-Kulu – he referred to her simply as ‘Kulu’ – campaigned for President Muhammadu Buhari when he sought reelection in 2019.

Specifically, on February 7, 2019, she was on the team of Aisha, Buhari’s wife, when the campaign train visited the palace of the Haruna Tanko, the gomo of Kuje, in Abuja.

However, Kyari said but for meeting Kulu, he might have never been married. Interestingly, Kulu is sister-in-law to Tahir.

“Today, I am happily married to Kulu, my adorable wife with four children. Who is my wife? She is Dr. Tahir’s sister-in-law. I met her in his house. It was through him and because of him I got married,” Kyari wrote in the tribute to Tahir.

Kyari was loyal to Buhari till the end

In his almost five years of holding the position as chief of staff, not a few controversies were tied to his name, even if he didn’t appear to speak to the press much about these issues. Amid an allegation that the late Kyari was involved in a N29.9 million bribe to facilitate a contract, Garba Shehu had dismissed the claim, saying the deceased could not have been involved when he rejected a monthly N200 million allocated to his office.

Writing in defence of Kyari, Shehu had said: “…the amount allegedly given in bribe was also suspicious, as the office of the presidential aide had been known in the past to receive imprest of 200 million naira and above every month, with no one expected to give account.

“It was only since Abba Kyari occupied that position that things changed. In blunt terms, it is difficult to make a case of N29 million bribery against an official who spurned a monthly payment of N200 million to his office, money for which he didn’t need to account to anyone.”

There were rumours that he influenced the sack of Winifred Oyo-Ita, former head of the civil service. In fact, there were reports of a hot exchange between Kyari and Oyo-Ita at a federal executive council (FEC) meeting over a leaked memo but a week later, the duo shook hands and flashed smiles for the camera.

There were other presidential decisions tied to his name, and in fact, brows were raised following the appointment of Aisha, his daughter, as the assistant vice president of the Nigerian Sovereign Investment Authority (NSIA).

Critics of the government had accused him of influencing the appointment but the agency absolved him of the allegation, saying Kyari’s daughter went through a rigorous process and emerged on her own merit.

HIS DREAMS FOR A BETTER NIGERIA

Kyari with Vice-President Yemi Osinbajo and Boss Mustapha, secretary to the government of the federation during FEC meeting at Aso Rock

Apart from his aspirations for improved power supply which was why he was in Germany to hold talks with Siemens, a German company, the late Kyari had other dreams for Nigeria’s development, including the restoration of schools and hospitals.

In November, he spoke of how the development of schools and hospitals would be one of the numerous benefits of the bill that amended the deep offshore and inland basin production sharing contract (DOIBPSC) act which Buhari signed into law days after.

According to Kyari, the bill, through which Nigeria is projected to earn an additional income of $1.4 billion annually from international oil companies operating in the country, will help in the development of key infrastructure nationwide.

He had said: “These are funds that will help restore our schools and hospitals, repair our roads and infrastructure and give our armed forces the support they need to keep us safe. That is a big win. But it is about more than just the money.”

THE JOURNEY FROM SOCIOLOGY/LAW AND INTO POLITICS

Called to bar 37 years ago, Kyari was a member of the Nigerian Law School set of 1983. He worked for the law firm Fani-Kayode and Sowemimo “for many years” after his return to Nigeria. From 1988 to 1990, he was Editor with the New Africa Holdings Limited Kaduna.

In 1990, he served as a commissioner for forestry and animal resources in Borno state, where he hailed from. From 1990 to 1995, Kyari was the secretary to the board of African International Bank Limited, a subsidiary of Bank of Credit and Commerce International.

He joined the United Bank for Africa in 1997 as an executive director in charge of management services and was later appointed the chief executive officer. He left UBA in June 2001. In 2002, he was appointed a board director of Unilever Nigeria, and later served on the board of Exxonmobil Nigeria.

Six days after he went on self-isolation following the confirmation of his COVID-19 status, Kyari issued a statement on his health. At the time, the rumor mill was agog that he had been flown abroad for treatment but in the statement, the last one to the public, Kyari had explained that he had concluded arrangements to be moved to Lagos from Abuja.

He had also expressed his wish to return to work “very soon” but that was not to be as he was buried at Gudu cemetery in Abuja on Saturday morning. He is survived by his wife, two sons and two daughters.