Nursing mom runs over a lady with her car, dumps her corpse in a dumpsite

A mother-of-two identified as Anita Harrison, has been arrested for allegedly running over a woman with her car and proceeding to dispose the corpse instead of taking it to the police station as advised by medical personnel. 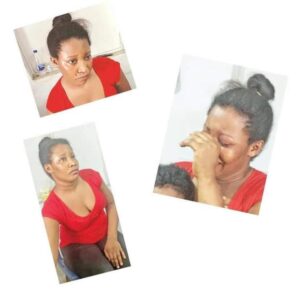 Crime Guard reports that the incident happened on Thursday, March 4, 2021. Acceding to the suspect, “A friend called me that she wanted to introduce me to a business. I went to meet her at Computer Village, Ikeja. On my way back, I gave her a ride. On reaching under the Ikeja Bridge, inward Agege, I didn’t know what happened.

I didn’t see anyone crossing the road, neither did I see myself ramming into anyone. I had driven past a woman when I heard people shouting . I don’t know if the tyre of the car climbed her or whether the car was close to her. It was the shout of people that made me stop.”

Rather than heed the advice, the suspect drove to an isolated place with a friend after the long bridge on the Lagos/Ibadan expressway and dumped the corpse, close to a dump site and zoomed. Meanwhile, apprehension had set in at the victim’s home because of her absence. Relatives of the 35-year-old victim, Lafiat Idowu, reported her disappearance to the Police, who conducted a routine search round hospitals, morgues and other places and eventually got to the hospital where she was deposited and that’s how they were able to trace Anita Harrison.

However, the Akwa-Ibom state-born suspect, expressed regret over her decision to dump the corpse in an isolated place. I don’t want to go to jail. I have two children. The first is two years and the second is just seven months old. Unfortunately, the woman that advised me to dump the corpse can’t be reached on phone,” she said.