A Nigerian-American, Vincent Omalu was shot and killed August 20 in a residential neighbourhood in Baltimore, Maryland by a shooter who has remained at large. 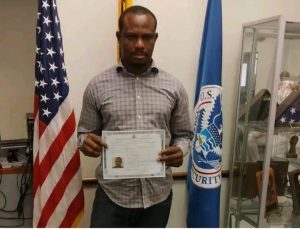 It was learnt that the victim was felled by a single bullet fired into his car from a gray or silver Infiniti SUV.

The police are calling the shooting of Omalu, who gained US citizenship in the summer, “random”.

However, the victim’s brother, Linus Omalu, who was with him at the time of the shooting, disputes this assertion.

He said Vincent and he were returning from a cultural meeting with other African immigrants when the shooting took place.

“My brother is a very innocent guy. We go to work, come back. Stay with our family.

“I don’t know the reason why he shot him. I just want to ask him why he would shoot my brother.”

He said that Vincent was behind the wheel when the sound of a gunshot cackled.

“When I heard that, I turned around to him immediately. I said, ‘You hear that?’” he said.

Linus said he had to immediately grab the wheel as he found out that his brother was hit and the vehicle lost control and crashed.

The suspect drove off and has not been found since.

WJZ quoted Detective Donny Moses of the Baltimore City Police Department as saying, “At this point, there’s nothing. It’s as if this vehicle just vanished and we know that’s not the case.”

Linus said that his family has been afraid to leave the house as the killer still remains on the loose.

He said he would like for his brother to get justice.