The Enugu State Command of the Nigeria Police Force says it has arrested four criminal suspects and recovered five firearms with various calibres of ammunition. 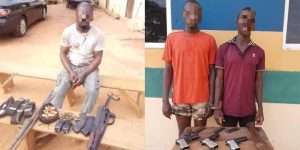 The command said their arrests was sequel to its current operational and crime-fighting measures put in place to smoke out criminals in and around the state.

A statement by the Command’s spokesman, Daniel Ndukwe on Thursday, said the suspects were arrested for various criminal offences based on a credible information and intelligence about their criminal activities.

Recovered from the suspects are – one AK-47 rifle with fifty (51) live ammunition of 7.62mm calibre, three locally-fabricated Beretta pistols, one Pump Action gun, Butt of a locally-made gun, thirty-one (31) live cartridges among others, Ndukwe has said.

According to the spokesman, “a review of these operational successes show that, acting on credible information, Police Operatives serving in Anti-Cultism Squad of the Command, arrested Ifeanyi Ngene aged 36 at Akwuke Awkunanaw, Enugu, on 06/12/2022 at about 9.30am and recovered in his unlawful possession; one (1) AK-47 rifle with fifty one (51) live ammunition of 7.62 calibre, one Pump Action gun with twenty five (25) live cartridges and two (2) AK-47 rifle magazines. Also recovered are: one (1) Senior Police Officers’ lineyard, three (3) black-coloured uniform belts, two (2) Forest Guards inscribed black berets and two (2) Walkie-talkies.

“Also, Kenechi Ngwuenwo “m” aged 25, was arrested on 06/12/2022 at about 4.40pm, by Police Operatives serving in Central Police Station (CPS), while on stop and search duty along Enugu/Onitsha Road, by New Market Enugu. One (1) cut-to-size locally-fabricated gun with six (6) live cartridges was found in his unlawful possession.

“Similarly, Police Operatives serving in No. 3 PMF Enugu, while on intensified patrol along Ozalla/4-Corners/Udi Road on 01/12/2022 at about 11.25am, intercepted and arrested Amaechi Precious aged 25, in a Toyota Sienna commercial vehicle transiting from Abakaliki, Ebonyi State to Awka, Anambra State. Upon search conducted, three (3) locally-fabricated Beretta pistols, one (1) Butt of a locally-made gun and other incriminating items were found in his unlawful possession.

“Consequent on further investigative actions, SWAT Operatives of the Command, 02/12/2022, arrested Oforzoba Amandi aged 26, at Anam in Anambra West LGA of Anambra State, identified as the recipient of the firearms and a member of the criminal syndicate.”

Ndukwe disclosed that all the suspects would be arraigned in Court after investigations were concluded.

While applauding the operatives of the command involved in the arrest, Ndukwe said the Commissioner of police has charged them to sustain the tempo in ridding the state of unrepentant criminals. Also he appealed to the good people of Enugu State to continue to assist the command with credible information.