Desperate attempts by Brazil based drug cartels to smuggle large consignments of Cocaine into Nigeria through three major international airports in Port Harcourt, Abuja and Lagos have been foiled by operatives of the National Drug Law Enforcement Agency, NDLEA, who arrested seven traffickers. 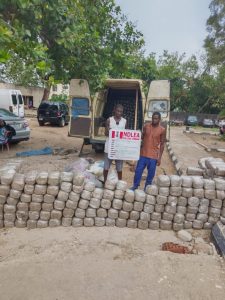 According to a release made available to Newsmirrorng.com and endorsed by Femi Babafemi Director, Media & AdvocacyNDLEA Headquarters, Abuja on Sunday 17th April 2022 confirmed that, at the Port Harcourt International Airport, five suspects were arrested on Saturday 9th April. Three of them were arrested during the inward screening of passengers on board Qatar Airline flight QR1433 from Doha to Port Harcourt. The three suspects departed Sao Paulo, Brazil on board same Qatar flight, en-route Doha to Abuja and Port Harcourt with a total of 24.96 kilograms of cocaine. 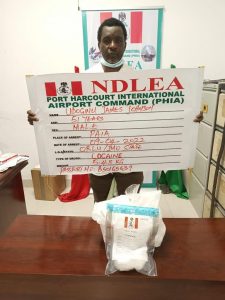 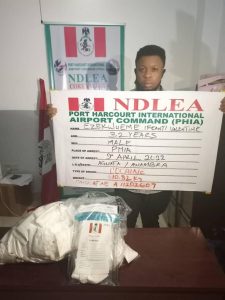 The first is 51-year-old Udogwu James Johnson who hails from Orlu LGA, Imo state. He was arrested with 5.48kg of cocaine concealed in lotion plastic bottles sealed with candle wax. He claimed he agreed to traffic the drug for a fee of N1million. 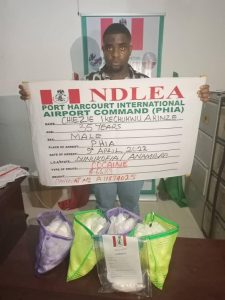 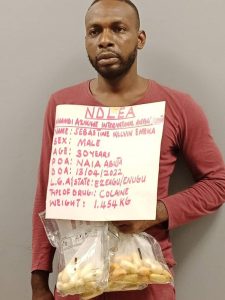 The fourth suspect, Uchechukwu Onwugbufor, 42, from Idemili North LGA, Anambra State, was arrested at the airport car park while waiting to receive one of the traffickers, Udogwu James and his consignment. He claimed he was contacted by someone in Brazil to receive Udogwu and lead him to Lagos for a fee of N100, 000. Uchechukwu Onwugbufor was at the Airport with his neigbour, Nwogu Ezimadu, who is equally being investigated to determine if he’s complicit in the crime or not.

At the Nnamdi Azikiwe International Airport, NAIA, Abuja, a Psychology
graduate of Imo State University, Owerri, Sebastine Emeka Kelvin, 30, was arrested with 74 pellets of cocaine weighing 1.454kg on arrival aboard Ethiopian Airline flight enroute Doula- Addis Ababa-Abuja on Wednesday 13th April.
The father of one who claims he’s a motor spare parts dealer is from Ezeagu in Ezeagu LGA, Enugu state. He said he’s lived in Cameroon for six years before going into the drug business to raise money to boost his trade. He added that he was introduced to the man who gave him the drugs at Addis Ababa by another
person serving jail term for drug offence at the Doula Newbell Prison.
In Lagos, another Brazil based passenger, Uba Samuel was arrested at the Murtala Muhammed International Airport, MMIA, by NDLEA operatives on Friday 15th April on arrival aboard Ethiopian Airline flight from Sao Paulo via Addis Ababa to Lagos with sachets of cocaine weighing 633grams concealed in his footwear and toothpaste tube.

The suspect who claims to be a shoemaker and barber hails from Umunneochi, Abia state. While accepting ownership of the drug, he said he used his shoe making knowledge to conceal the drug in his pair of sandals. Uba who is a regular traveller confessed he bought the drug to sell at a market in Abia.

Meanwhile, more illicit substances were recovered in raid operations in other parts of the country. In Gadaka village of Fika LGA, Yobe state, operatives arrested one Hassan Usman with a total of 22, 110 tablets of Tramadol, D5 and Exol 5, while one Ali Mohammed was nabbed in a commercial vehicle coming from Kano to Maiduguri with 40 blocks of cannabis weighing 33kg. Also arrested on the Kano-Maiduguri route was a driver Ibrahim Khalil Idris with 60 packets of Tramadol, all on Tuesday 12th April.
In Kogi state, 750 blocks of Cannabis weighing 750kg were seized from two suspects: Hassan Adamu, 25, and Abdulmalik Abdullahi, 24, along Okene-Abuja highway.

The drug exhibits were concealed inside fabricated panels of a Ford bus.
Chairman/Chief Executive of NDLEA, Brig. Gen. Mohamed Buba Marwa (Retd) has commended the officers and men of the PHIA, NAIA, MMIA, Yobe, and Kogi Commands of the Agency for disrupting desperate attempts by drug cartels to traffic dangerous drugs into Nigeria and across the country. He said the huge seizures at the airports will send a strong message to drug barons that Nigeria will no longer be their safe destination or transit route.