Governor Okezie Ikpeazu has restated his irrevocable resolve to rebuild Aba and restore its greatness for the greater good of the people of Aba and Abia State in general. 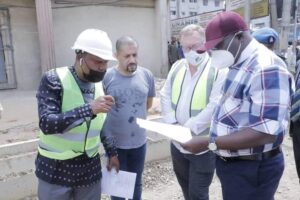 The Governor stated this today while on a comprehensive inspection tour of the reconstruction work at Ngwa Road Aba and the flood control projects around the Ndiegoro area of Aba. 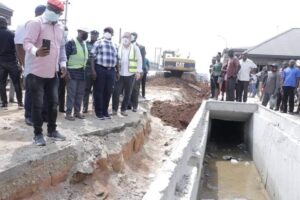 The Governor who was taken round the projects by the Permanent Secretary of the Ministry of Environment, Mr Iheanyi Ubani, mni, the State NEWMAP Coordinator, Engr Izuchukwu Onwughara and a representative of the main Project Contractor, Messers Hartland Nigeria Ltd, Engr. Laurent Bancod, expressed delight at the pace of work at the various project sites. 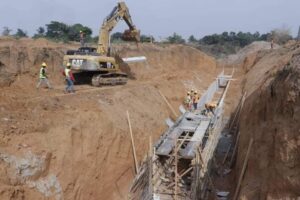 The Governor was informed by Engr Bancod that all was almost set for the arrival of the mega equipment that will be used for the laying of the underground tunnel which will manage storm water in Aba. The equipment with a lentht of 75 meters and weighing several tons will be moved into Aba in a few weeks and that in readiness for its arrival, a 3. 5km access road covering the entire Aja Road off Ngwa Road, through Agu Road, Mbaise Road and Dikenafai Roads all in Ngwa Road is being constructed and will soon be asphalted to make way for the heavy equipment. 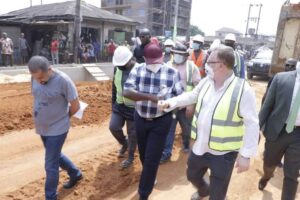 This equipment, the Contractor stated, has the capacity of digging tunnels underground up to a depth of 17 meters and also laying the tunnels simultaneously. This exercise will proceed under the soil and under several buildings with the buildings remaining intact.

The Engineer told the Governor that the magnitude of this project makes it the first of its kind anywhere in Nigeria in the area of management of storm water.

The project site is located at a community lying at the border between Aba South and Ugwunagbo LGAs. The name of the Community is Aza while the villages whose lands were acquired for the project are Umugbo, Umuwaoma and Nkpunkpuevula villages all in Ugwunagbo LGA.

As at today, work is also ongoing at Port Harcourt Road, Aba as part of the bouquet of ongoing projects in Aba.

The Governor stated that the completion of these projects will make life more meaningful for the people.