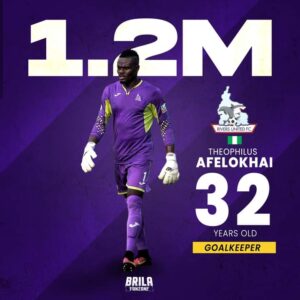 The former Enyimba star signed for the Port Harcourt based side from the former NPFL champions, Enyimba at a record fee of ₦4 million.

The 32-year-old Afelokhai won the NPFL with Kano Pillars and Enyimba and his experience will become handy as the Rivers United seek to win the league season after season.

Afelokhai was with the People’s Elephant for five years having joined the Aba side from Kano Pillars in December 2015.