The Imo State Government on Friday evacuated more than 10 decomposing bodies dumped in a pit.

They include the corpse of the traditional ruler of Ihitte Ihube in Okigwe Local Government Area, Eze Paul Ogbu. 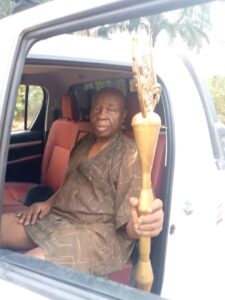 The bodies were found in a kidnappers den at Nkwerri Uda community in Orsu Local Government Area.

Also evacuated was the body of the youth leader of Ihitte community, Okigwe, Victor Chukwuemeka Osueke, who was abducted with Eze Ogbu last week.

Several human skulls were found in the bandit’s camp, as well as decapitated bodies.

It was found that some of the bodies appeared to have been roasted and some of them consumed.

A joint security team of Army, Airforce, police and DSS accompanied the mortuary attendants from the Federal Medical Centre (FMC) Owerri and Aladimma to evacuate the bodies.

The son of the late traditional ruler, Prince Chuks Ogbu, confirmed that one of the evacuated bodies was that of his father.