MARADONA : 10 THINGS YOU SHOULD KNOW ABOUT THE LATE FOOTBALL LEGEND ! By Ori Martins

1. Fight back spirit: Maradona was not really enterprising in his first World Cup outing in Espena ’82. He was sent home ingloriously with a red card after tearing Zico’s (I think so) shirt. However, four years later, in Mexico ’86, he led Argentina to a World Cup glory. 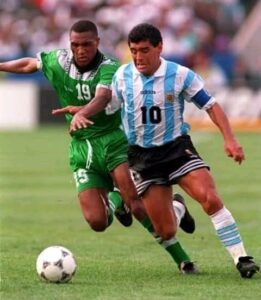 2. Risk taker: Probably, what would go down as the best goal of the World Cup ever was scored by Diego in the quarter final game against England in Mexico ’86. He dribbled all rushing English defenders before putting the ball beyond goalkeeper Peter Shilton. 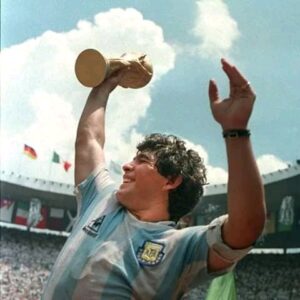 3. Humility after cheating: The global football legend charmed world sporting press, particularly English sports writers when he was asked about the goal he scored against England and Maradona said “it was hand of God goal”. All at the press centre were aghast and matter closed.

4. Courageous fighter: The 1990 World Cup Finals in Italy was a terrible experience for Maradona and Argentina, from the opening game where Cameroon defeated the defending champions 1- 0. Argentina lost their next other game and qualified as best lossers of the group. In the quarter final match against Brazil, Maradona picked up the gauntlet and shattered the Carica led Samba Boys, 1-0. Brazil with a more beautiful and more balanced team team went home, while Argentina whose first choice goalkeeper had injury challenges qualified to the next stage.

5. Self confidence: In 1989/90, Maradona was nicknamed god in Napoli because of his exploits which propelled the team to Europa success. As a matter of fact, because of Maradona, Italians fans were divided on where to place their support – Argentina or Italy. In the quarter final match of Italia ’90 against now dissolved Yugoslavia, the game entered into penalties and Maradona misses his but still inspired Argentina to victory. In the semi final game against host Italy, Tito Schilachi put Italy ahead but Maradona, mustering self confidence, inspired Argentina to level up and eventually won the scintillating penalty shoot out. It was one of the brightest days of Maradona in his chequered football career.

6. A tree that makes a forest: Since Maradona left Argentina as a player in 1994, the national team has not been doing well. Even when the team made it to the final in Brazil few years ago, it was regarded more as a fluke than phenomenal performance. In 1982, Maradona was sent out via a red card and Argentina never made any headway. In 1986, Maradona was in form and Argentina lifted the World Cup. In 1990, Maradona was still the biggest name in global football and he piloted his team to the final but lost controversialy albeit gallantly to Germany 1-0. In 1994, a case of illicit drug abuse was established against Maradona, he was sent home and Argentina was eliminated the next moment. Maradona, a tree that makes a forest.

7. A bad manager: Maradona was a bad coach, a bad manager. His days as Argentina coach was one of the worst in the country’s history.

8. A social nuisance: Maradona had bad habit. He was not a good role model in the shoes of Pele. He was bad example to the youths outside football.

9. Trouble maker: Remember his unbecoming remarks about Nigeria in the last World Cup Finals. Such should not have come from a world football legend like him, prompting FIFA to hammer him with sanctions.

10. God loved him: Despite Maradona’s many unpardonable flaws, reckless life styles and unprofessional bearing, he still was a World Cup hero, a football legend and lived up to 60 years.
May his soul rest in peace.